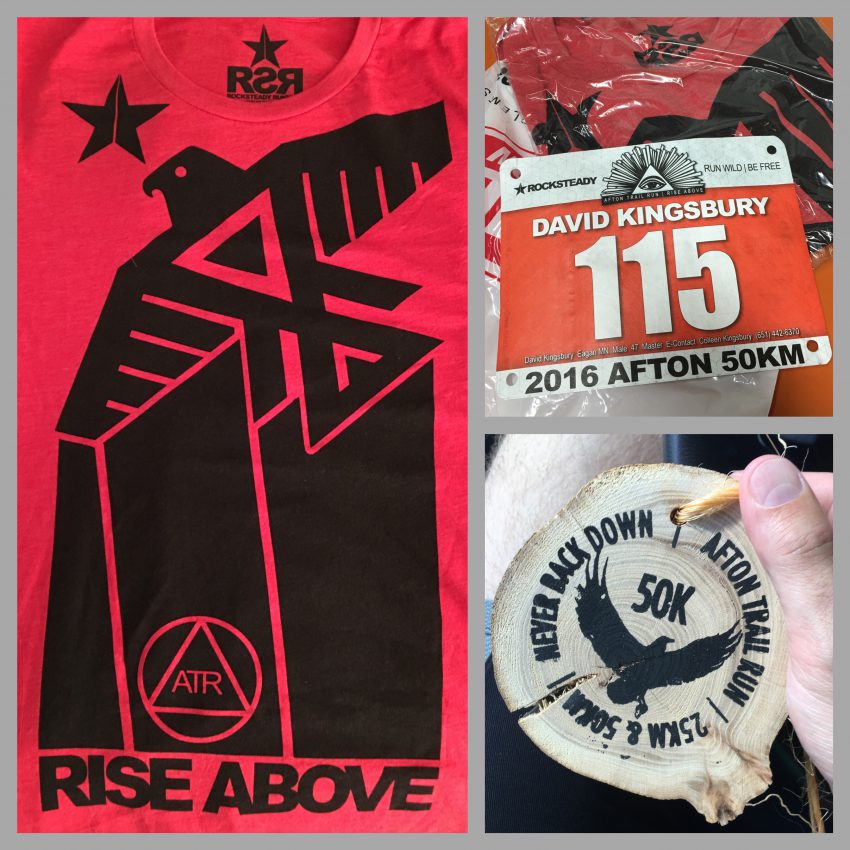 Founded in 1994, the Afton Trail Run 50K is one of the premier trail races around, held annually on the Fourth of July weekend over the (very) hilly trails of Afton State Park. Part of John Storkamp’s excellent Rock Steady Racing series, I decided to add this one to the list for 2016 after handing out finisher medals there last year with Megan. Talked with John at the finish Saturday, but I never knew his full story – so inspiring (and makes me want to support his races even more).

Couldn’t ask for better weather for this race – it was around 60F at the start and never broke 80F. The sun was an issue towards the end, but a lot of this course is in the trees, so my sunburn wasn’t too bad. It did feel warm when I finished, but I know I was very, very lucky compared to prior years. The old “wet sponge tucked in my shirt” trick was quite handy and many thanks to the volunteer at the final aid station who poured ice water on my shoulders. Low humidity and a light, cool breeze also helped things immensely.

This course is quite challenging: two loops of 15.5 miles, 11 aid stations, a net elevation change of 9,340 feet and a 9 hour time limit to finish. Afton State Park wraps around Afton Alps ski area and borders the St. Croix River (both of which I know well), but I was constantly getting confused as to where I was during the race. The race map shows we ran all over the place – up and down the river valley, around the Highlands and Alps areas of the ski area and along two different stretches of the river.

I love race day packet pick-up: saves time (and fuel) and is just way more convenient all the way around. The race started at 6:30am and I got there around 5:30 to check in and pick up my number, the beautiful T-shirt and a race swag bag. Ran into WeRunMpls co-founder Kaitlyn, who was running the 50K with her dad. Hung out in the car for a bit, then we were off and running (one hour before the 25K start).

Completed the first loop in 3:15:35 (12:36 Minute Miles) and was passed by a million 25K runners towards the end. Since I decided to walk every hill on both loops, I was OK with that split. In my mind, I decided that even if the second loop took four fours, I’d still be way under 8. It took me 4:22 to complete that second lap, but I’m still fine overall with that time – I hadn’t run at all since Grandma’s and the weather was definitely warmer the second time through.

Speaking of two loops – I really prefer the out and back style of the Superior Spring 50K compared to this format. At Superior, each half seems different, since you are running up one way and down the other (even if it’s the same trail). At Afton, you get to the end of the first loop and all of the 25K runners are finishing right there, while you have to start all over again. Mentally, a tough image to process. John and I talked about the other differences between the two courses: Superior being much more technical and Afton usually having brutal weather.

Many props to 50K winner Kurt Keiser of Jordan, who at age 42 managed an overall pace of 7:14 over those hills to finish with a 3:44:27 (full results here). My pokey 7:37 was good for 191st out of 210 overall and 30th out of 33 in my age group. I know ultra trail racing isn’t all about the times for most people, but it would be nice to be a little closer to my road marathon performances. Still, this was a 52 minute PR at 50K, so there’s plenty of room for future improvement.

Big thanks to the wonderful group of volunteers, many of them trail runners themselves. The aid stations were delightful – just like a full service filling station. Every time I hit one, someone would run up and take my water bottle to refill while I visited the food table. My most frequent items: peanut butter and jelly sandwiches, pretzels, gummy bears, Coke and multiple salt tablets (I had recurring cramps in all four leg sections all day). The burger picnic at the end was very nice too (although I couldn’t manage to down the whole thing so soon after finishing).