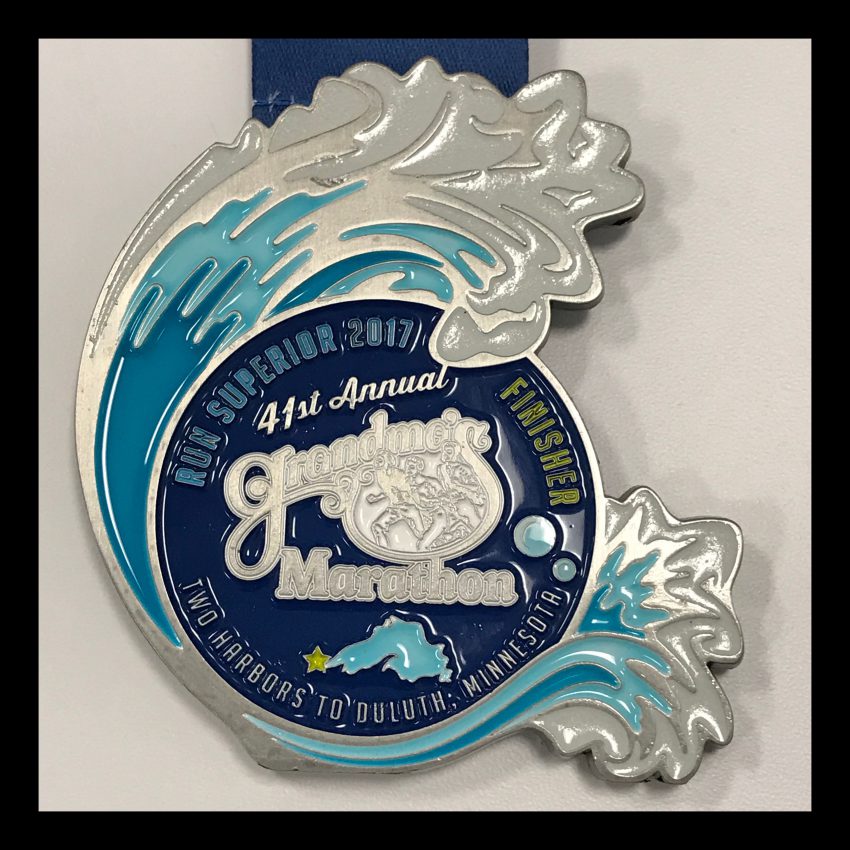 With my lack of miles this spring, I wasn’t expecting much from Grandma’s this year. What happened last Saturday, though, was really something else. Talked into this race by my colleague Shannon, I was hoping to keep up with her for at least the first half. She followed a real training plan, though, and I had only one long run in the last month (and only 162 miles for the year).

The forecast looked warm (again), with clouds and a strong chance of rain. We rode the train to the start, which amazingly had no line to board this year. One last bathroom line wait and we were off. We stayed in front of the 4:15 pacer for a few miles, then I told her to take off (which she did, finishing in a strong 4:17). I crossed the 10K mark in 1:02:29 and was hoping to hold on to a ten minute pace. Unfortunately, a mile later I experienced a pain behind my right knee that I had never felt before. I tried the walk/run thing several times, but ended up basically walking the next 19 miles to the finish.

I believe last year was the first year they expanded the official race limit from six to seven hours, so I kept doing the math in my head to make sure I could walk and still get an official finish. When I finally got downtown, I asked a police officer when the streets re-opened and found out I had 30 minutes left to walk the last mile. No problem, right? I hobbled on and crossed the finish line after 6 hours and 36 minutes (nearly three hours slower than my PR – full stats here).

During that time, the green flags turned to yellow, the sun came out (frying my neck and face), it rained twice and the temp surged past 72F. Walking that long created large blisters on both feet, which caused me to walk crooked (and hurt my ankles). Most of the food was gone at the finish line, but I still got the coveted finisher shirt and medal. The music tent had a nice merchandise stand, so I was able to keep the race poster tradition alive too. The long walk from Canal Park up the hillside to the car was a struggle, as was the shower at my sister’s apartment. Hopped in the car and drove back to the metro right away to get to the Pantages for the Seu Jorge Bowie tribute show (which was amazing – story to come).

Not really sure what my running future holds now. I did sign up for the Donut Run in August (and am still registered for the Get in Gear next year). I’ll leave my name in the London lottery (since I didn’t have to pay anything and there’s like a 2% chance I’ll get picked). To be honest, it’s rather nice to not have any pressure to train right now – plenty of other stressors these days…