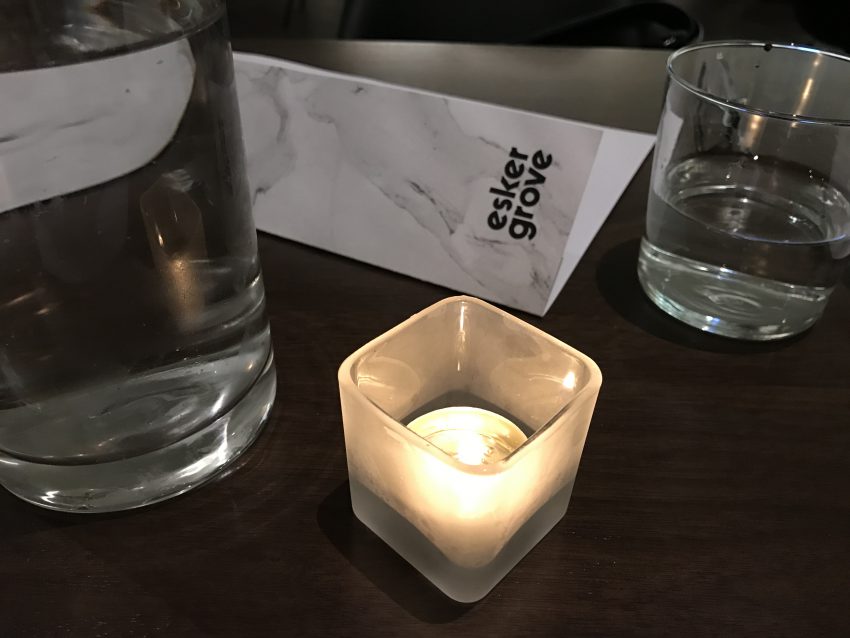 I’ll interrupt this stream of Vegas posts to briefly talk about Esker Grove at the Walker. One of Doug Flicker’s projects, it’s been open for a bit now and we went way back in December (as an anniversary gift from kid one – thanks, SK!). Rick Nelson gave it 3.5 stars (out of four) in his Strib review and Dara’s review at Mpls.St.Paul magazine talks about the tea that Colleen liked so much:

The green tea toddy was a treasure. It came as a pure white cup with an orange-flower rose in its heart. When the server poured in a blend of green tea, lemon, and honey and orange flower water, the orange peel unfurled into a ribbon before my eyes like a conjurer’s trick. The scent of orange exploded from the cup and then vanished to be replaced by great familiar comfort. That’s some tea.

Two former La Belle Vie alums are also part of the deal: chef de cuisine T.J. Rawitzer (who has a fun Instagram account to follow) and bar manager Jon Olson (who I think was also part of Bradstreet Crafthouse, no?). The space is part of the newly redesigned Walker north entrance, directly across from the remodeled sculpture garden. It’s very nice and fits the museum well, in my opinion. Not sure if they will rotate the artwork along the back wall, but the beautiful collage by Duluth artist Frank Big Bear was present when we visited.

Looks like the menu changes often, as what’s posted online now only contains one thing I remember ordering (Endive & Farro Salad, 11 – blue cheese, smoked honey, vinaigrette). You can take a look at my pictures after the jump, which also includes scallops, steak, swordfish and dessert. Doug and Amy are working on their new Bull’s Horn project in South Minneapolis now (along with the big Heggies Pizza news), but I recommend you stop in to the “old” joint on your next visit to that part of town.