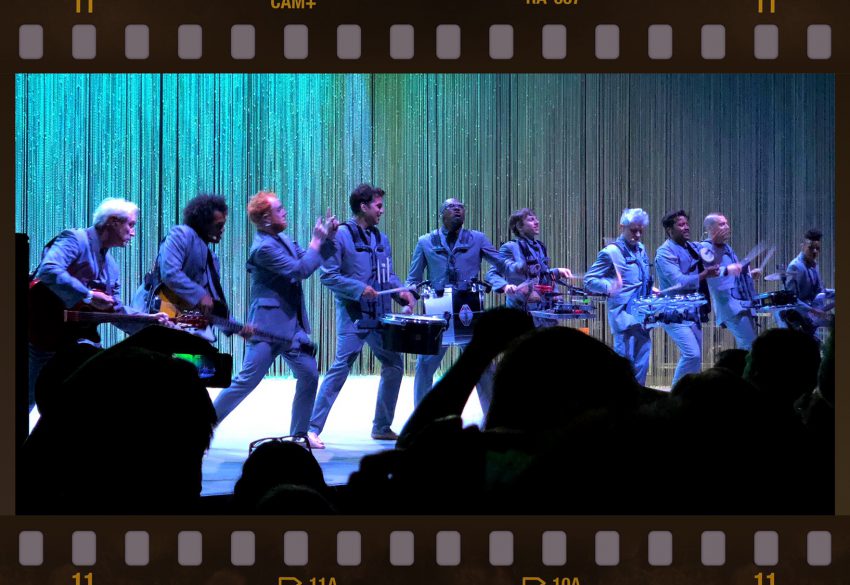 Now that we’ve lost Prince, Bowie and Petty, David Byrne is one of the last living links to my favorite music growing up. Never got to see Talking Heads perform together, but I’ve seen Tom Tom Club once and Byrne solo a few times (does Jerry only produce now?). Looking back in the archive, I saw him at the State doing Brian Eno songs and at the Fitzgerald, along with the talk he gave at the History Theater when How Music Works came out. Last Friday I added another show at the Orpheum, where he did two nights with his new critically acclaimed production (see Bream, Current and City Pages reviews).

Must admit I had a few strikes against this show before it began. First, I had already seen most of it during the Cochella live feeds last month. Second, I had read a review somewhere (that I can’t find now) that said this production blew away Stop Making Sense. Those are fighting words to me – Demme and Bernie Worrell (RIP), Chris, Tina and Jerry, the big suit – nothing will ever top that in my mind. Lastly, I walked in to the theater early and an usher directed me to the wrong section. Instead of a great center seat in row seven, I was in the farthest seat over to the side and couldn’t see all of the stage. On top of all that, my co-worker had seen the Thursday show and said the opening act was the worst thing he’d ever seen. With all that in mind, let’s get this show started, shall we?

My friend DGS told me the opener was Benjamin Clementine and that his daughter was excited to see him because he was featured on the Gorillaz song Hallelujah Money from their last album. He also said it was “an odd set.” I did a little research and saw that the New York Times named him one of 2016’s 28 creative geniuses and that he won the 2015 Mercury Prize, which is given out for best album from the United Kingdom and Ireland. Most importantly, David Byrne himself wrote a story for the New York Times about him in 2016 that you can read here. Yes, parts of his set were odd. His piano playing and voice, though, were pretty damn cool. And anyone who tells rube hecklers to fuck off is A-OK in my book.

It seems like this tour doesn’t change much up from show to show, so the setlist that the Current posted from the Thursday show (edited below) seemed almost exactly the same as what we got on Friday (and very similar to Coachella). It was heavy on the American Utopia content and traditional Talking Heads songs, but very little old solo stuff (just like the other shows I’ve seen). I was really happy to hear The Great Curve and Born Under Punches (The Heat Goes On), neither of which I think I’ve heard live. The new songs are growing on me, but each one caused everyone to sit back down again (which I guess is the norm for everyone).

A few other notes: dancer/singer Chris Giarmo kinda freaked me out when I first saw him on the Coachella feed, but I thought he was great in person. The choreography in general was amazing – so many people going in so many directions, yet no one crashed (that I saw). The lighting and chain backdrop was cool (but still no Stop Making Sense in my mind). Liked the support of HeadCount and the addition of the (Janelle Monae approved) Philando Castile line to Hell You Talmbout to close out the show.