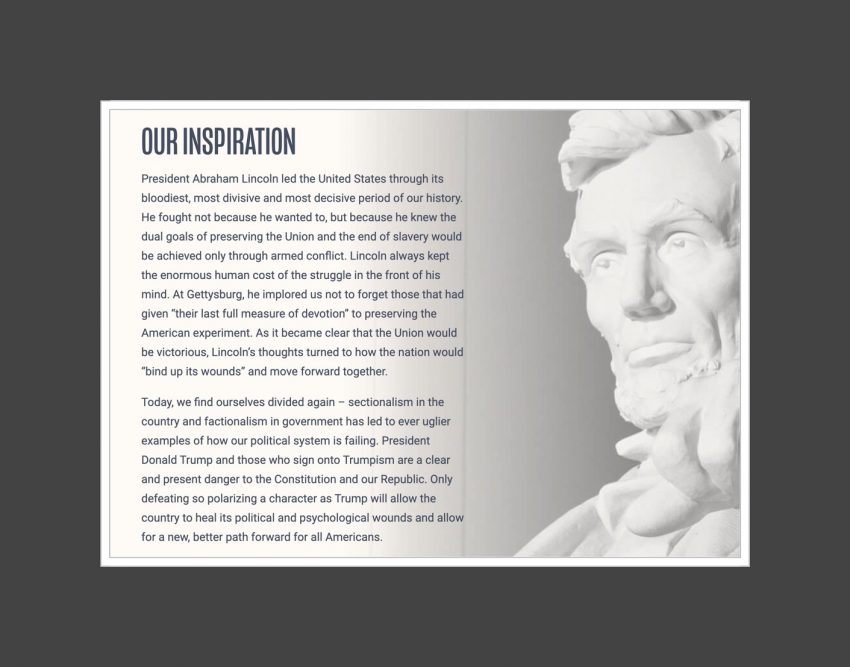 Just like in real life, I try to avoid discussing politics and religion on this site. As an avid student of history, however, I’m really fascinated by the changing face of the Republican party in the United States. In particular, the formation and actions of The Lincoln Project, support from some of the Minnesota Republicans of my youth and the reaction on the “new right” by people like Jason Lewis to these efforts.

As I’ve (reluctantly) shared in the past, I do not consider myself a Republican or a Democrat (or a conservative or a liberal). I like to evaluate all issues independent of the pre-conceived platforms of those labels and form my own opinions on a case-by-case basis. What I find interesting about the Lincoln Project is how some people I thought would always be set in their ways have changed their position over time. Take Steve Schmidt for example. Here’s the guy who pushed John McCain to select Sarah Palin and worked with George W. Bush, Dick Cheney and Arnold Schwarzenegger on Trump:

The 43rd President of the United States listened to Trump’s inaugural and turned to the former Secretary of State and said, “well, that was some weird shit.” Indeed it was. Trump, raged about “American carnage” and described a dystopic America that existed only in the fever dreams of a noxious mix of conspiracy theorists, demagogic commentators and dishonest propaganda platforms getting rich by spreading the disinformation planted by foreign intelligence services. Three years on it turns out Trump’s speech was prophecy. He has brought devastation to America. His legacy will be mass death and economic collapse caused by his staggering incompetence and ineptitude. The United States is the epicenter of Covid-19 disease and death and the reason is because of Trump. Trump has failed at an epic level. He has divided the county and stoked a cold civil war. He has lied more than 17000 times and desecrated the American Presidency. He has assaulted American patriots, our most important institutions and attacked the rule of law. He is corrupt, indecent and utterly lacking character. He processes none of the qualities of greatness and goodness that have steered our country through its’ darkest nights. He is a fool without compare. He is intellectually unfit and mentally fragile. He is unworthy of his office and unfit for its duties. We are living in a moment of American weakness unlike any of us have ever seen. Trump is the architect of that weakness. He is the instrument of our precipitous national decline. Recovery from this disaster will take many years. Trump is not capable at any level of leading it. The election ahead is the most important this country has faced since 1864. Let it end this rancid era of the reality show Presidency. Let it send this tiresome and ignorant bully back to Trump Tower and cleanse the stench of his corruption, idiocy, racebaiting and failure from our national life. The name Trump will long linger. It will stand for suffering and unnecessary death. It will stand for economic collapse and financial ruin. It will stand for failure and weakness. It will stand for decline and dishonesty. It will stand for stupidity and indecency. But mostly it will mark a tragic time in America where the worst leader in our long history, a man so outmatched by history’s test was the President. He will be remembered rightfully as the worst one we have ever had.