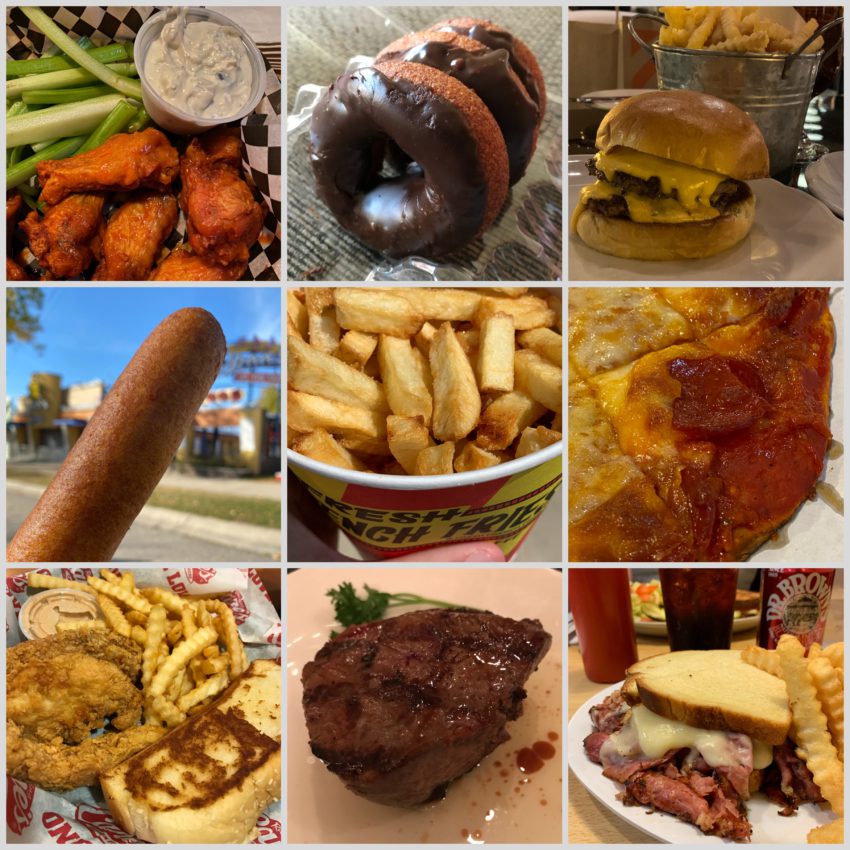 Three years ago, I did a “Top 7” post on my favorite foods, but that talked about food categories in general terms. Lots of people have asked me about my favorite specific food items, so here they are (in no particular order):

Let’s start in the Northland at one of the premier dive bars in the country, the VC. Also known for it’s 24-inch Bamboozler pizza, the homemade bleu cheese is the best I’ve had anywhere. Wednesdays are wing night, so load up on buffalo sauce and dip away in that amazing bleu. I usually order some Poor Gary’s pizza too, but I never really have room for that in the end.

Staying on the Northland theme, let’s take a trip to the little village on the big lake, Grand Marais. While there are many great food traditions in town (Sven and Ole’s, Angry Trout Cafe, Blue Water Cafe – hell, even the local DQ is bomb), the claim of “World’s Best Donuts” is 100% true. Given the chance, I could eat an entire bag of the chocolate cake donuts in one sitting. Pro tips: pre-order online to skip the line and pay extra for a box instead of a bag so the chocolate doesn’t stick to the side.

Closer to home, the cheeseburger at Saint Dinette is my favorite burger of all time (and I’ve tried way too many). The competition between Chef Adam’s masterpiece and Au Cheval in Chicago was anti-climatic (and definitely not worth a multi-hour pre-pandemic wait). I’ve long had a soft spot in my heart for the burger at Fuddruckers in Bloomington (RIP), but that was good in a different way. Lots of people in town love the Parlour burger (and I think it’s very, very solid), but I’ve got to give the nod to the St. Paul contender. Team Nive Man, all the way!

Going to cheat with a two-fer of Minnesota State Fair classics: the Pronto Pup (NEVER CORN DOG SINCE 1947) and Fresh French Fries. Of course, the fair has an amazing assortment of excellent food options (corn roast, Blue Barn, Lulu’s), but I can eat Pronto Pups right when I get there in the morning and just before we leave after a late Grandstand concert (and usually several more times in between). I LOVE French fries (Barbette, the clown, many others), but this year’s pandemic Food Parade reminded me that the red and yellow booth serves up the best ones ever.

If you’ve been following this site at all the past few months, you probably saw that we’ve been making a habit lately of visiting Carbone’s on Randolph for pizza on Mondays. This is the pizza of my childhood, and only the original Randolph location is legitimate in my book (the other franchises try admirably, but they just aren’t the same). We had our concerns when they closed down briefly to remodel and expand, but the original ovens remained and the greasy flavor lives on. In a metro area full of great pizza options, Carbone’s on Randolph is the one for my list.

I wasn’t sure if I wanted to have a fast food entry on my list, but the 3 Finger Combo at Raising Canes is something I could order every day and not get tired of it. The quality of the chicken is always top notch, they have great fries, the Texas toast is a nice extra and for someone who grew up wanting things plain, Cane’s sauce is the best. Also love the little ice cubes in the freshly made lemonade. Egg McMuffins from the clown are also something I could eat every day (and the quality never wavers no matter where you are in the world, which is an incredible feat). And of course, Arby’s has the meats.

I’ve handed down my love of steak to my eldest daughter, but I’ve yet to take her to the temple of Minneapolis beef, Murray’s. Now I know that many people consider Manny’s to be the temple of Minneapolis beef, but I went to Murray’s first, sharing a Silver Butter Knife steak with my mom way back when. I thought it was magical that they could cook such a thick steak so uniformly perfect and have it be *so* tender. These days, I usually get there for the luncheon filet, a 6 ounce tenderloin with au gratin potatoes that is an absolute steal at $32. Just like pizza, there are a lot of great steak places in town, but Murray’s is my fave.

After I came up with this list, Colleen asked me, “what about Cecil’s?” Their New York style hot pastrami & Swiss on egg white absolutely needs to be top 7, but I don’t know what I want to bump off the list. Let’s just go with eight for now…

UPDATE: I also forgot about mild chilitos with extra cheese at Zantigo.