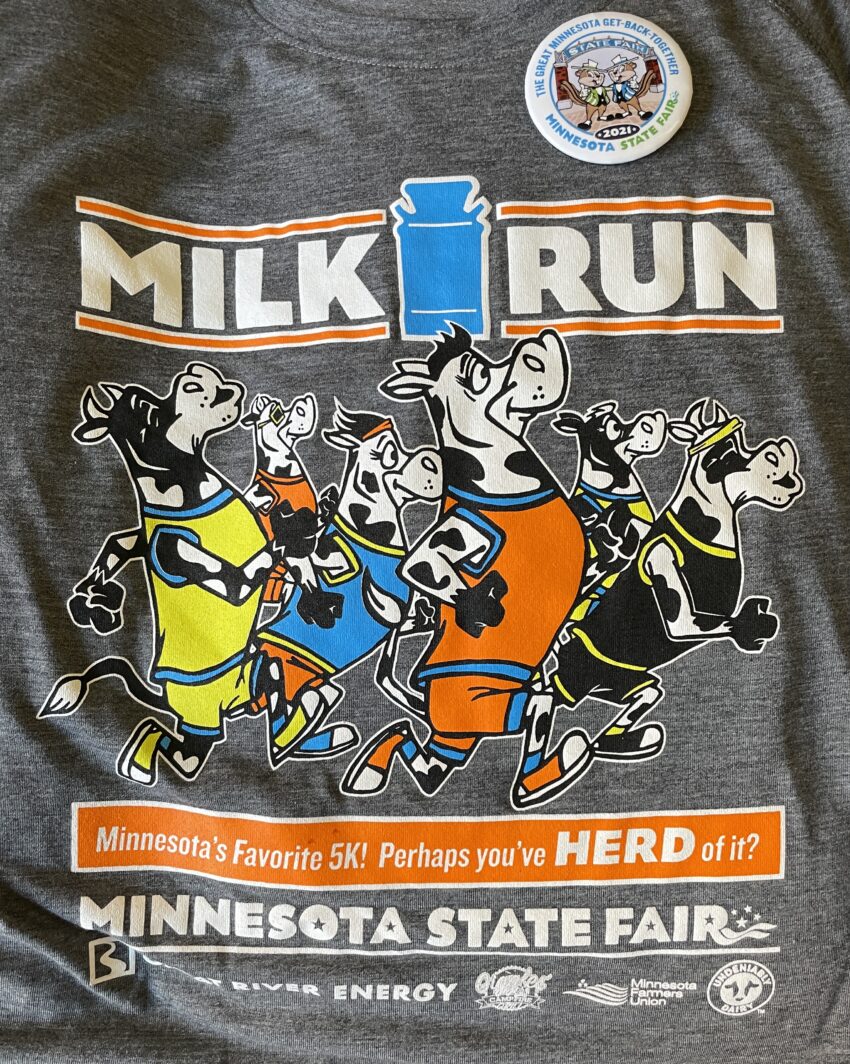 It’s a little crazy to look back at the post I wrote from the last time I ran the Milk Run 5K at the Minnesota State Fair. Back in 2015, I was on a streak to get closer to actually winning an age group ribbon (awarded to the top three in each category) and was disappointed to run an eight minute mile. This year, my C goal was to finish, my B goal was to run the whole thing without stopping to walk and my A goal was to finish faster than my previous slowest time (39:09). Considering I haven’t really run at all since the Get in Gear, it was a minor miracle I hit all three goals (finishing in 32:55).

That 10:36 pace was good enough for 20th in my age group (out of 30) and 399th out of 911 total finishers. My age group leaderboard is still full of fast old guys, with the winner running a 20:11 (6:30 pace). My Milk Run PR of 21:42 would’ve put me just two seconds out of the third place ribbon, though, so there’s still hope. I’m not sure that I will ever get back to distance races, but I could see myself trying to get better at 5K and 10K runs. It was really fun to be back out on a real course again (with a few spectators even). Probably could’ve shaved a few more seconds off if I didn’t wait to start in the back of the pack – there was quite a slow logjam for the first half mile or so. The watch says my mile splits were 10:32, 10:11 and 9:43, so that’s a positive. Hopefully there will be no football game again in 2022 (which is the reason I’ve missed the last four pre-pandemic years).

The course was the same as the last time I ran, starting on Machinery Hill and running through Saint Anthony Park and the University of Minnesota Saint Paul campus. I waved at the old Vince Fan house on Dudley and was amused by the milk protesters halfway through the race. The start and finish were at the intersection of Randall and Underwood, a block over from Giggles’ Campfire Grill, which was kind enough to give all runners a free breakfast sandwich, a slice of watermelon, some blueberries and a bottle of water after the race. I also used my free malt coupon at the Dairy Building (which thankfully wasn’t closed, contrary to a rumor we had heard). Picked up my shirt after the race and went back to the car to change, which was really refreshing. Getting in to park at Snelling and Hoyt was also much less stressful than last time, but leaving that way at 1:30pm was a hot mess.

Colleen went to get Sweet Martha’s cookies while I went to change, and the new(ish) location on Machinery Hill gave her a huge pile of extra cookies. We shared some with the people at the Kemp’s booth, who surprisingly enough asked me about the milk protesters on the 5K course. We found the Wyatt & Ethan bench near the tiny farm and both of us had our first Pronto Pups of 2021. Thankfully, they tasted back to normal (after having mixed experiences during the drive-through events of 2020).

We headed down to the Agriculture Horticulture Building next so that I could finally cross The Peg off my list. Billed as the fair’s only full-service restaurant, it’s been open for 37 years now and I’d never stopped to eat there (until today). Ordered a large lemonade, the breakfast sandwich and a side of hash browns – all of which were solid, offering good value, seats in the shade and great service from a friendly server. We stopped inside the building (masks on) to see the crop art and the bees before heading across the street to the Dairy Building for my free malt (and a stop at Fresh French Fries). Lots of interesting crop art – including my office amongst the nearby scarecrow section.

Along this path, we discovered that the old Senior Center is now called the Ramberg Center and hosts a Music Cafe lineup that included Steve Roehm from the New Standards playing a solo set. We talked to him afterwards and mentioned it was so nice to see him play recently at Mears Park (and up at Lutsen last March – our first post-pandemic concert). He said he was originally booked to play with his other trio – The Neighborhood Trio – but that the other two bandmates had conflicts and the fair booking agent said he could just play by himself. What a nice surprise!

We struck out on two things we were looking forward to: the Minnesota Lottery booth wasn’t selling any scratchers this year (they just had a contest you could enter) and the Poultry Barn was closed for cleaning. We did stop and listen to a band from Ecuador on the DNR Stage while I got some Spring Grove black cherry soda. There was also a giant Adam Turman chair that we look ridiculous in, but of course had to get a photo. Colleen then visited the Turkey-To-Go stand for one of Rich Wang’s favorites. The DNR fire tower was closed and it was sad to see the sign that basically said all staff are gone fighting fires.

We then dropped in at Steichen’s, the “complete food market” that opened in 1933. Colleen said she had been in there before, but I’m pretty sure that was my first time. After that, we headed to the West End to visit I Like You and Lulu’s Public House, where I bought my usual bull bites, mac and cheese on a stick and Mt. Dew. It was getting hot and crowded, so we checked out the latest Blue Barn menu on the way back to the car, then headed home. Back again on Tuesday for the Doobie Brothers at the Grandstand, so more to come…