The many faces of Black Orchid 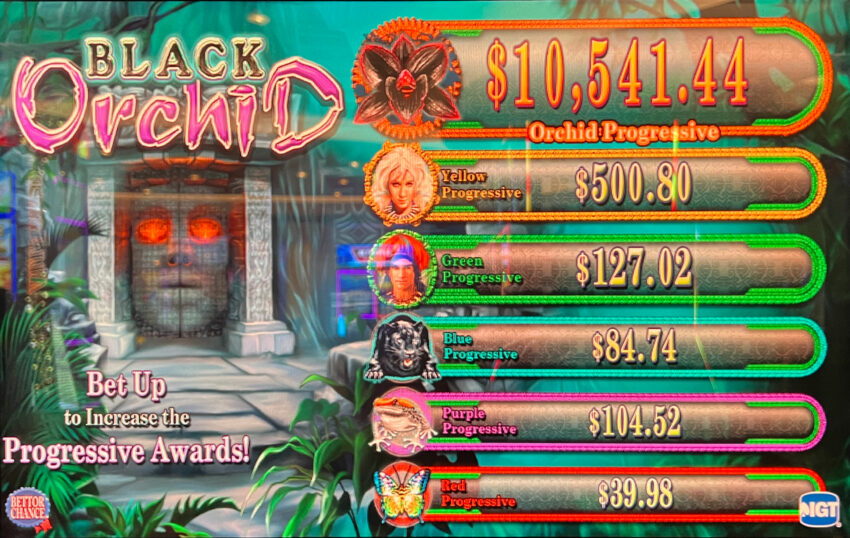 Slot machines are fascinating to me – there are literally thousands of different games available in casinos around the world (and online). There are games with licensed pop culture content, brands cultivated by companies like Aristocrat and IGT, infinite varieties of video poker and keno – heck, even YouTube slot celebrity Brian Cristopher has his own branded slot machine now. These games form the revenue foundation for most casinos, but they can be complex to analyze when you throw in multiple denominations, bet levels, volatility and progressive jackpots.

One game that touches on all of these variables, Black Orchid from IGT, also happens to be one of my personal favorites. Introduced around 2013, it spawned two alternate themes based on the same math and gameplay model (Silk Seduction and Vintage Love) and can still be found in a few Minnesota casinos (Mystic Lake has two, Grand Casino has a bunch in both of their locations, Black Bear had three and Fortune Bay used to have one before the pandemic, but it has not returned). I last saw Silk Seduction at Bellagio (since removed) and there used to be Vintage Love games at both Hinckley and Treasure Island (also removed).

Black Orchid appeals to me because of the high volatility gameplay, tropical soundtrack, dimensional graphics (glowbugs!) and the affordable bet levels. Of course the biggest reason is probably that the Orchid is the only game that I’ve won hand-pay jackpots: $3,992.54 in October 2016 and $3,247.79 in May 2017. These both happened on 40-cent bets at Mystic Lake, which resulted in returns of 9,981x and 8,119x. Let’s take a deeper dive into the complexities of this classic casino game.

It is rather shocking to me that more information about slot machines is not documented online. These games have a lot of details for players to learn (and for the operators to market). The various online and app-based companies that offer “free” versions of real-life games are one way for players to become familiar with the ins and outs of a game, but unfortunately I have not found Black Orchid on any of these services (it appears there was a PC-based option at one point). The Lightning Link app licensed by Aristocrat supports many of their popular real world games, even giving players stats on their pretend play.

YouTube slot channels are another great way for players to become familiar with new games and how they play before they use real money. There is no doubt that influencers like Brian Christopher have impacted the popularity and business success of various games over the years. Casinos still tend to limit who can film on their floors, so I think older games like Black Orchid won’t get much of a boost from these channels, as influencers tend to focus on new games and marketing partnerships. I’m also seeing a trend towards more and more high-denomination videos, which means my little game with a $4.95 max bet is unlikely to be featured. I am curious to see if casino marketing departments start to shoot their own slot play videos to promote games (both new and old).

Speaking of max bets, let’s look at the options on Black Orchid. In Minnesota, I’ve only seen a penny denomination offered (even in the Hinckley high limit room). There is a video on YouTube with a ten-cent version, but I’ve never seen this in person. At Mystic Lake, the minimum bet is 40 cents. There are also 80-cent and 99-cent options, plus multipliers of 2, 3, 4 and 5. This means you have fifteen different bet options between $0.40 and $4.95 per spin. The machines at Grand Casino also offer 20-cent and 1-cent options, which gives 25 different bet options starting at a penny a spin (and some very interesting low-bet opportunities that I will discuss shortly).

So what’s the difference between the 1, 20, 40, 80 and 99-cent options? One word: pay-lines. The penny option gives you one pay-line (the five squares across in the second row down from the top), plus the four squares in the middle (top to bottom) that award the Orchid progressive when you get four black orchid symbols in those positions. The 20-cent bet gives you 20 pay-lines; 40-cent is 40 pay-lines; 80-cent is 40 pay-lines plus a 40 credit MultiWay bet for an extra 1024 ways, while the 99-cent bet is 60 pay-lines for 57 credits plus a 42 credit MultiWay bet for an extra 1024 ways. Learning what is and is not a pay-line or “way” is complicated:

With this being a high volatility game, you can go many, many spins without a winning line hit. The real money for players is in the progressives: there are five smaller progressives and the one large Orchid progressive. To win one of the smaller progressives, you need five of the same symbol on a pay-line (with or without wild symbols, which can appear anywhere except the first column). You can win the same progressive on multiple pay-lines, but the additional lines all pay at the starting amount for that level. 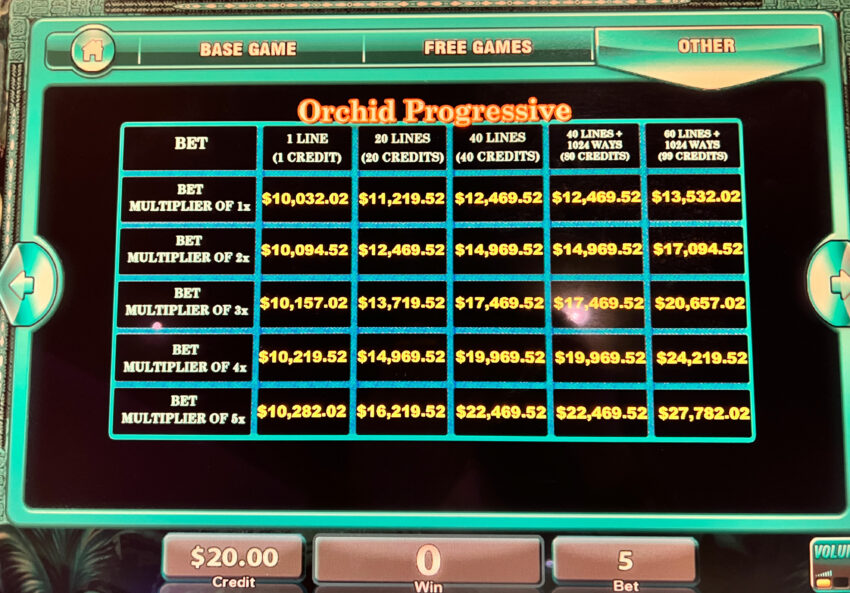 When that progressive gets very large on a machine that allows 1-cent bets, you can in theory win more than $10,000 on a penny spin. If you up your bet to what I call nickel Orchid, you can also win $500+ on a nickel spin. I’ve done that once at Hinckley, hitting a $524.76 Yellow progressive for a return of almost 10,500x. Playing nickel Orchid is fascinating – you can rapid-fire spins for hours and usually not risk more than $100. With only one pay line, winning spins are rare, but have high ratio paybacks when you do hit:

Triggering free games in nickel Orchid often results in the dreaded “FREE GAMES COMPLETE” screen, with no money won. I’m convinced, though, that your odds of winning the Orchid progressive are the same on a nickel spin as they are on a $4.95 spin (I talked to my old IGT friend about Black Orchid odds once, but I still don’t know all of the math behind this game). I do think that winning the smaller progressives is much harder on nickel Orchid, though, as there are 39 (or 59) fewer winning lines in play. It blows my mind that you can potentially get a 200,000x win on a nickel spin. This excitement is what gets people to play – and to return again and again in person.

While first researching Black Orchid, I came across the personal website of someone who listed themselves as a game designer on this title. I emailed him to ask if he could share more about the development of this slot machine, but never received a response (he may be under NDA for all I know). I’d love to know more about the math and why there is a rare alternate graphic for the cat… 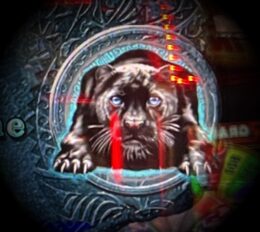