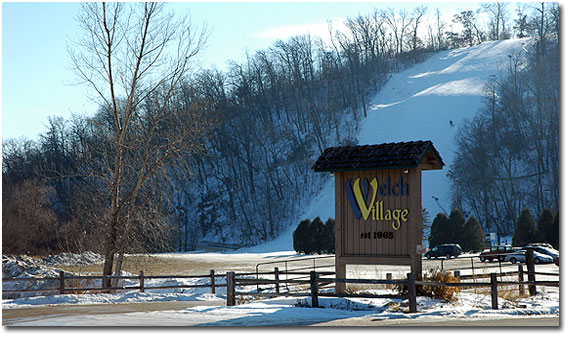 We finally made it out for our first ski day of the year with a visit to Welch Village this morning. We started at 9AM with sunny skies and decent temps that kept rising all morning. Tickets were $45 for adults and $40 for kids, but you could get a $10 per ticket gift certificate if you turned in your tickets within four hours of purchase (which we did).

Crowds got bigger as the morning went on, but lines never got very long. We mostly skied on the east end of the area, hitting runs like Dan’s Dive, Dud’s Dream and Pete’s Pike. I also took one run on Chicken (for old time’s sake) and was surprised to find the steep, shaded run with very little ice.

We took a morning break at Madd Jaxx for hot chocolate and cheese curds before heading back to the west side and the main chalet around noon. It was more crowded on that side of the area, but still reasonable for this time of year.

The near-mythical “back bowl” was still not open, but I heard patrol talking about how there is a lot of snow back there and that the new chairlift is being stress-tested for a possible 12/31 opening (season-ticket holder access only for the first month).

Welch Village holds a lot of special memories for me from my high school racing days and is still my favorite near-metro area. Skiing in Minnesota will back later this season to report on the new runs and bring you more photos in our photo gallery.

I’ve personally used Descente ski jackets and pants since I started racing in high school 20+ years ago. Their clothing has always been top-notch and can usually be purchased far below the suggested retail price if you know when and where to go.

In the past, this meant places like White Wolf (RIP), Hoigaard’s and Joe’s. These days, I really like Valley Bike and Ski in Apple Valley – friendly staff, good sale prices and usually a great selection of Descente.

Two years ago, I purchased the coat pictured above and was exposed to Descente’s unique Passport Program – the jacket came with a book of passes to various ski areas across the country. We used three of them, which basically paid for the coat. Spirit Mountain was the only Minnesota area that year, I believe.

Full Disclosure: Descente sent me an email about a special online sale they are having for their DNA line and I noticed they had a promotion for webmasters that will award a free jacket to selected sites that link to them. Free jacket or no, I’m happy to write about their great products and refer people to Minnesota ski shops that carry Descente.

According to an email from them, Lutsen Mountains is opening Saturday, November 22, 2008 with five runs on Ullr Mountain. They are making snow and hope to have 20+ runs open by Thanksgiving weekend.

Early season deals include 2 for 1 lift and lodging (through December 18) and a free concert on Saturday night at the always great Papa Charlie’s by slide guitarist Nathan Miller. 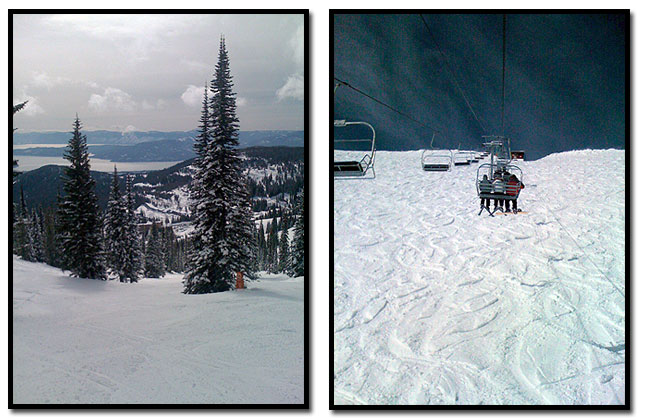 Made it back yesterday. Overall, we had a very nice, relaxing and unique trip. Also realized this trip completes #25 of my things to do list: Ride a train across the Rockies.

Picking up from the last post, kid two participated in an all-day beginning Mountain Riders class on Friday, while kid one and I skied together all day. I got to ride the two new lifts I hadn’t been on (the triple and the T-bar) and both the snow and the weather were great.

My uncle came back from Spokane on Friday evening and we went to dinner with him at the St. Bernard’s Pub. This on-mountain restaurant has been there since the 60s and the inside decor has not changed much since then (it was awesome). I had a really good hot turkey sandwich that was a little different: thick bread, garlic spread, turkey, cheese and gravy with thin cut Idaho french fries on the side.

We all hung out at the condo until it was time to drive down the mountain to the train station. It was snowing pretty hard again (they were expecting another nine inches of new snow overnight) and the road to Sandpoint was treacherous. The train was only a few minutes late arriving and we made it with plenty of time to spare.

The ride back was less stressful, as we knew what to expect. It snowed all the way to the Minnesota/North Dakota border, so the views weren’t quite as good as the westbound journey. The train was packed and we were told they were sold-out for the next five days. There were switching problems in Montana, so we arrived in St. Paul about two and a half hours late.

More pictures have been uploaded to the photo gallery (Travel/Empire Builder and Private/Spring Break 08). Please contact me if you need the password for the private section.

I’ve been coming to Schweitzer Basin since I was nine. The resort has changed a ton since then. In fact, it’s changed since I was here two years ago. Venerable chair one has been replaced with two new lifts: a high-speed detachable quad that goes to Midway and a fixed triple over Face to the top. It remains a great, relatively undiscovered ski area with lots of great terrain and few crowds.

After arriving a little after midnight on Monday at the Sandpoint train station, my uncle Greg from Spokane picked us up and drove us to his condo on the mountain. On Tuesday morning, he skied with kid one, while I took kid two on the bunny hill. About 400 feet down, kid two fell and strained her knee. She totally wanted to quit, but I got her to ski between my legs to the bottom of the hill. We did four more runs that way before meeting the others for lunch.

After lunch, those two took off and we tried Happy Trails again. Another fall and things got worse. Kid two limped back to the car, dropped off the skis and hobbled to the ski patrol office. Ice, Advil and no more skiing for the day was the diagnosis. We sat in the lodge while the others skied.

On Wednesday, the wonderful staff at the Kinder Kamp agreed to take kid two for the day, even though she was now too old to go there. So Greg, kid one and I got to ski together all day. It pretty much snowed all day (about 4 inches), which gave me my first ever ice beard. We had lunch at the Outback Inn, which uncharacteristically had seating available inside. The Idaho potatoes they serve there are to die for.

The snow yesterday was awesome. The temperature stayed around freezing, but the snow felt wet when it hit you. Once on the ground, though, it stayed pretty light. 3-4 inches of soft snow on top of groomed corduroy is skiing nirvana for this old guy. Sundance and JR (kid one’s first true black diamonds), along with G-3 and Revenge on the Colburn side were my favorite runs of the day.

Today, kid one joined the Mountain Riders–instructor-led groups for kids too old for Kinder Kamp. Dave the instructor led the three Riders all over the mountain, including the new T-bar (which I still haven’t been on). The new snow was knee-deep today (12 inches overnight) and the sun made a brief appearance around lunchtime. Medium-strength wind all day, though.

Kid two and I hung out in the village all day. In the morning, we did some shopping, purchased internet access for the day, uploaded a bunch of photos and had lunch at the Chimney Rock restaurant (taking a break from the cafeteria food). In the afternoon, the kid watched a movie on the laptop while I read a bit of the Ed Viesturs book my friend Jake lent me.

Now we are about to head back to the condo, make dinner, then start getting ready for the return train ride late Friday night (we actually leave at around 2:30am Saturday morning). Depending on the weather (and the knee), we should have one more day of skiing tomorrow too. 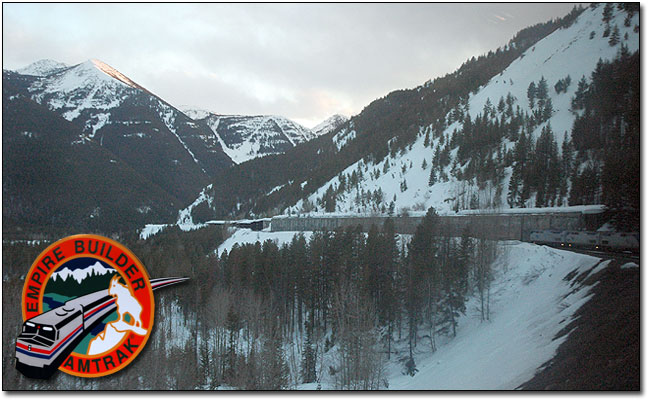 This year I decided to take the kids on a new adventure for spring break–riding the Amtrak Empire Builder train to Sandpoint, Idaho.

The last time I rode Amtrak was when they still had a train between the Twin Cities and Duluth. This one was very different–top speed of 79mph and a coach capacity of 266 people (which I think we actually had).

The Empire Builder runs between Chicago and Seattle, leaving St. Paul around 11:30pm and arriving in Sandpoint 22 stops and about 26 hours later.

Yeah, that was a really long time, but overall it was enjoyable. In fact, it would probably be my favorite way to travel if we had booked a sleeper room with an electrical outlet instead of coach. Our seats actually did have an outlet, but in a cruel twist of fate, it was partially blocked by the immovable seats in front of us.

The uncertainty of doing something for the first time led to a lot of stress. I wasn’t sure about the luggage (no checked baggage to Sandpoint and a weird ski bag rule), didn’t know much about the on-board food options and was afraid I’d miss getting off the train in the middle of the night.

The baggage went fine, food options were varied (although I’d bring more of our own stuff next time) and the conductor took care of getting us off the train at the right time. We were about 45 minutes late, but in general, I thought it was a good operation.

North Dakota and eastern Montana were just as you’d expect. In fact, I think this is where all old American cars and trucks go to die. The scenery improved immensely at Glacier, but that was also when the sun went down.

Up next: skiing adventures at Schweitzer Mountain Resort