Boogaard Modeling at the Fair 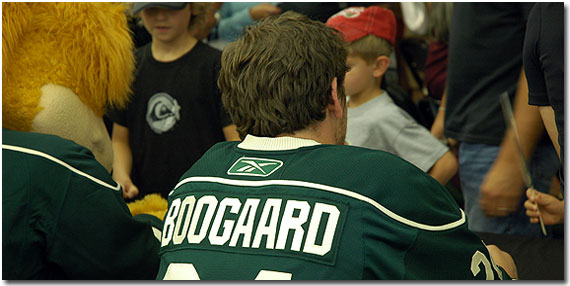 You know it’s almost time for hockey hibernation in Minnesota to end when you start seeing Wild players at the state fair. This year it was Derek Boogaard modeling the new third jersey and signing autographs last Sunday in the new Fan Central building.

Much has been written already about the new design and I’ll just say that I think it will grow on me, but it doesn’t knock my socks off. There are so many font styles battling that it seems a little disjointed (and that capitol “M” seems…weird). I guess I was just a big fan of the original Wild logo (that now only appears prominently on the white jerseys).

The new season is only 13 days away – let’s play hockey!