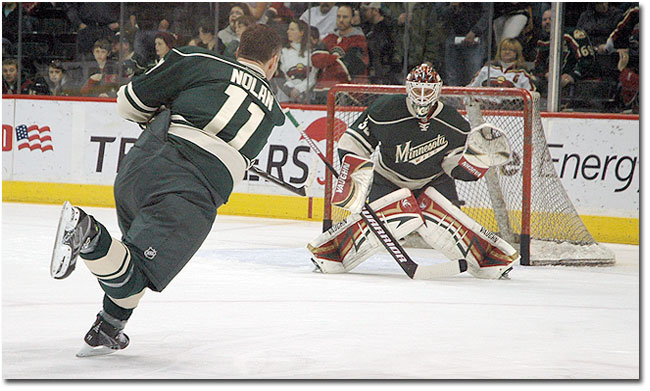 It wasn’t under the greatest circumstances, but I was offered the chance to watch the last three Wild home games in my aunt and uncle’s seats. He suffered a stroke last week and had to spend most of the week in the hospital, but is now home and doing better.

The first two games, Phoenix and Atlanta, were frustrating losses. I felt the Wild played OK in both of them, though, and deserved at least a point both nights.

Sunday’s game versus Vancouver more than made up for it, with the Wild earning a 6-2 win in front of the third largest regular season home crowd ever. Kid two and her best friend were “bench buddies” before the game and got to sit on the Wild bench during pre-game warm-ups (pictures in the private section of the photo gallery).

The addition of Cam Barker was a surprise to me (Kimmy and our first round pick?), but I’ll give our new GM the benefit of the doubt. I don’t know what I’d do if I were him now – the playoffs seem like a long-shot, but I don’t think I’d go into sell-off mode either.

The Olympics stuff at the beginning of the game was nice. I was especially impressed that people applauded loudly for all of the Canuck Olympians, despite the intense rivalry (and general hatred) of that franchise. Minnesota fans know (and appreciate) good hockey players when we see them, even if they do play for the Canucks. 🙂