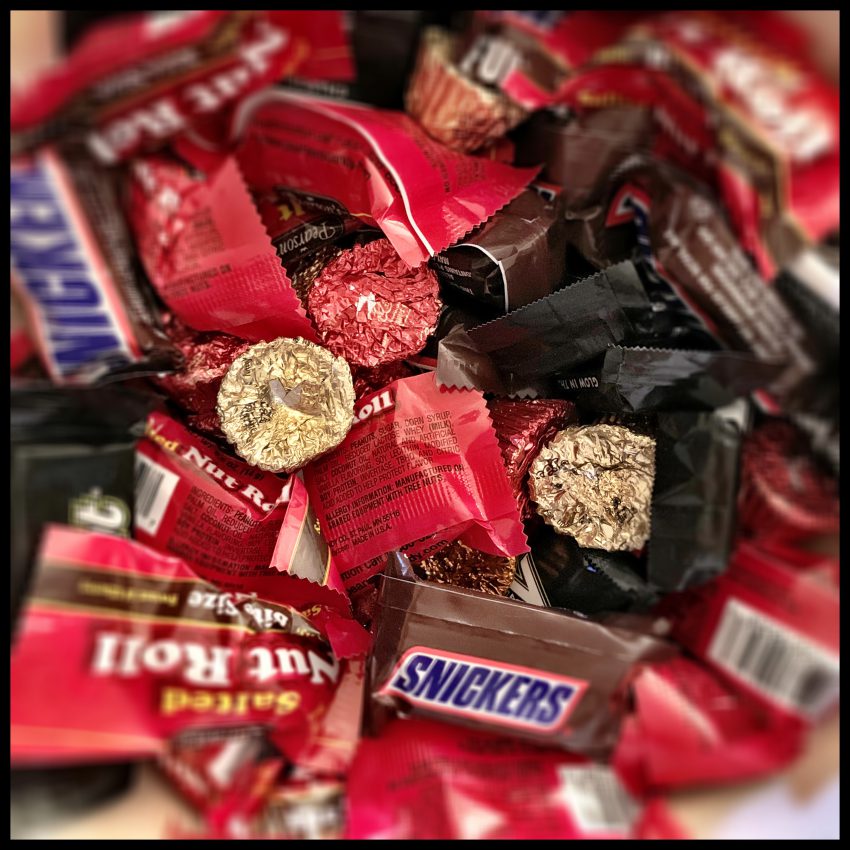 Secure building = I get all the candy

Pick your favorite and say hi 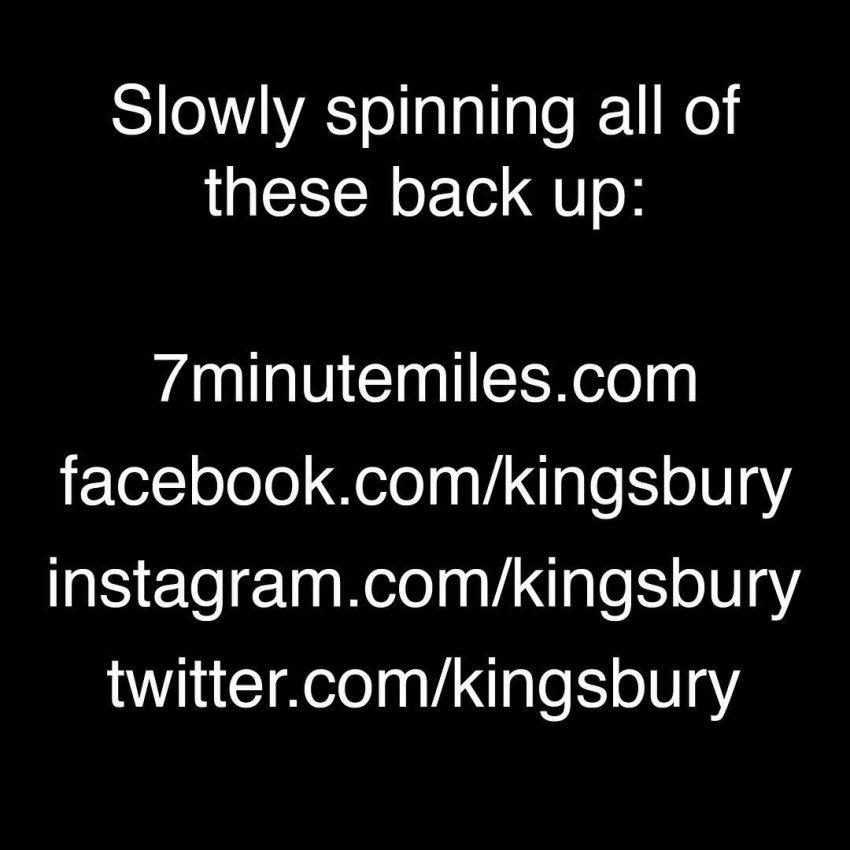 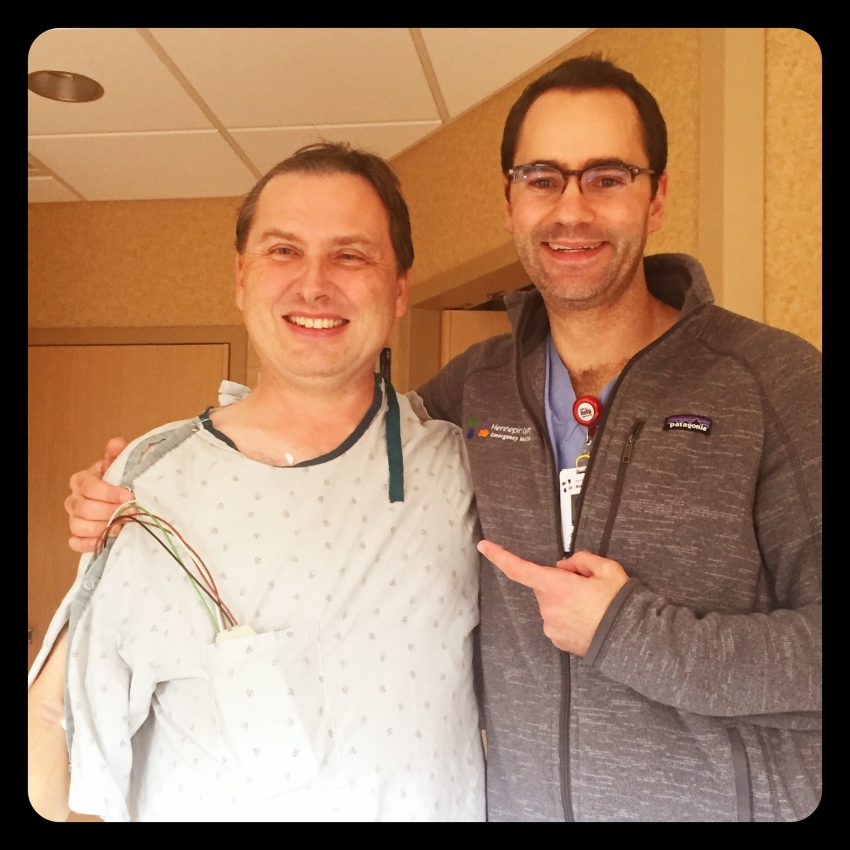 The day after the TC 10 was definitely not my typical Monday. I didn’t have any meetings scheduled, so I slept in a little later than usual, then walked over to the train station. I texted Armon that my neck was super sore when I woke up, but that I was headed in. I was told later I brought a bag of groceries for my office, along with my badge and headphones. When I got to the stadium train stop, I exited the train, walked towards Chicago and Fourth, crossed the train tracks, then suffered a ruptured brain aneurysm, followed by a seizure and stroke (and the groceries went flying everywhere).

I haven’t seen the video footage or read the police report yet, but I reportedly fell and hit my head on the train tracks and was unresponsive. A good Samaritan bystander administered CPR and a Metro Transit police officer contacted HCMC for transport the three blocks to their Level I Trauma Center. As my sister said, it was almost like my mom and my grandfather were watching out for me, deciding it was too early for me to join their party. The doctors later told me the overall odds of surviving a brain aneurysm are under 40% and that if the other pieces hadn’t fallen into place, there was a zero percent chance of me making it.

To be honest, I don’t really remember much about the first few days in the ICU. Colleen says I was a gremlin, trying to bust out of the unit and needing to be restrained. The first procedure completed was the placement of two stents in my left vertebral artery to treat the aneurysm. Dr. Tummala and his team of amazing vascular neurosurgeons were the first in a long line of HCMC care providers who literally saved my life. I can’t say thank you enough to this amazing group of professionals (including Dr. Clay Garthe, neurosurgeon, pictured above).

After the stents were placed, a drain was placed in the top of my head that regulated pressure and fluids in my brain. This was connected to a bag that filled with what we affectionately called “brain juice.” Normally, these fluids are processed back into your head, but after the trauma, the team wanted direct control over this. The drain became the first milestone in my recovery – I couldn’t leave the ICU until the drain was removed. We thought this would happen around the two week mark, but thanks to some unexpected vasospasms, we had to wait until day 21 to remove the drain. This extra week also included multiple trips to the CT scanners and two angioplasty procedures. I only remember the second one, which included the surgeons playing Tequila Sunrise by the Eagles, which of course made me think of The Big Lebowski.

I had a number of different therapists work with me while I was in the ICU, including a speech pathologist (Kim), physical therapist (Kari) and occupational therapist (Bri). Don’t remember much about the speech tests, but the other two were fascinating. Bri had a lot of interesting iPad apps and encouraged me to continue with Two Dots and Words with Friends on my phone. She also had a number of written tests that I got better at as time went on. Kari accompanied me on my many walking laps around the ICU, which included exercises that reminded me of the Ministry of Silly Walks. I also seriously wanted to learn this choreography, but that will have to wait for another time (and maybe a future Halloween costume?).

Three of my early issues were taste, hearing and vision. Hospital food doesn’t have a great reputation, but really nothing tasted right to me the first week. Big thanks to everyone who smuggled in outside food (which also tasted funny for a long time). They were threatening a feeding tube down my nose if I didn’t increase my caloric intake, so I quickly became a fan of hospital scrambled eggs, milk shakes, Boost, 1% milk and juices pretty quick. Only threw up once (drank a milk shake too fast after taking meds) and had a constant fight with sodium (of all things), and ended up on salt pills with lots of Gatorade and no water. Bonus: down 23 pounds!

Hearing and vision issues have been odd. Colleen initially sounded like Snow White, then like an Imperial Probe droid from Empire Strikes Back. Sasha sounded like Rosie from The Jetsons. Thankfully, that only lasted a few days. Vision has been a problem that I still suffer from today. Double vision lead to an eye patch that I was suppose to swap back and forth, but I was definitely favoring the right eye (which was the only one I could use to read close-up screens). I can now use the left to watch TV clearly, but this is an area that will likely need more therapy. It’s really the primary source of remaining head pain (which I can use limited Tylenol to treat).

Colleen has been a saint though this entire episode. She met with HR reps at both her work and mine to take care of paperwork and start working with my insurance company (we are both on Federal Medical Leave for the short-term). She started a great CaringBridge site to keep everyone informed of my status that as of today has received 8,806 visits. I didn’t have a login while I was in the hospital, but thank you to everyone who commented or posted on that site – your support was heart-warming (and a bit overwhelming).

She also started a GoFundMe site that has been well supported. We are 75% of the way to her initial goal, which will definitely help as the bills pile up and our income slows down. The rack rate on my hospital stay may approach a half million dollars, so I truly appreciate all of you who have already contributed and humbly ask for help to get to our goal. So far the summaries from the insurance company have looked promising, but I know they are many, many more that we haven’t received yet and I’m sure there will be multiple payment plans to be negotiated.

Big thanks to everyone who visited me in the ICU, called, sent cards and commented online – watch your mailboxes for something special in the next few weeks. Also want to send a special thank you to the Vikings, who brought me a custom Kingsbury #1 jersey and a signed Stefon Diggs photo of the Minneapolis Miracle. How cool is that?

Being home versus being in the ICU is a 1000% improvement. My arms and fingers are starting to not look like pincushions, I don’t have a million wires running everywhere and I don’t have someone waking me up every two hours to give me more salt tablets and horse pills (now it’s just five normal pills when I wake up and two when I go to bed). I also get to take showers whenever I want, brush my teeth every morning, sleep in a soft bed with flannel sheets and watch TV with a screen big enough to read the letters and numbers during sporting events.

I was sad that I missed senior night for Marisa’s swim team, the Avett Brothers concert at Mystic Lake (where I had third row center tickets), Timberwolves opening night in a suite and the Wild vs. Kings game with my uncle. But my new philosophy when I get sad or start to complain is that I can let that control my life or I can just be happy to be alive.

When viewed through that lens, the answer is easy…

I’ve seen the Exorcist about a hundred and sixty-seven times, AND IT KEEPS GETTING FUNNIER EVERY SINGLE TIME I SEE IT… 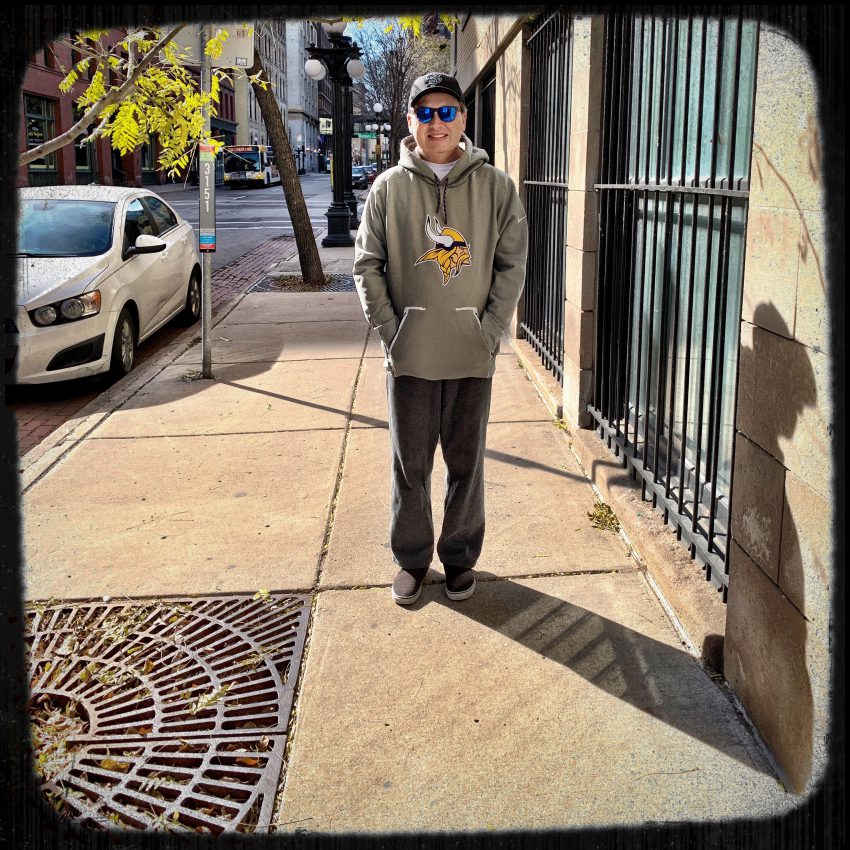 Yeah, enough with that barking 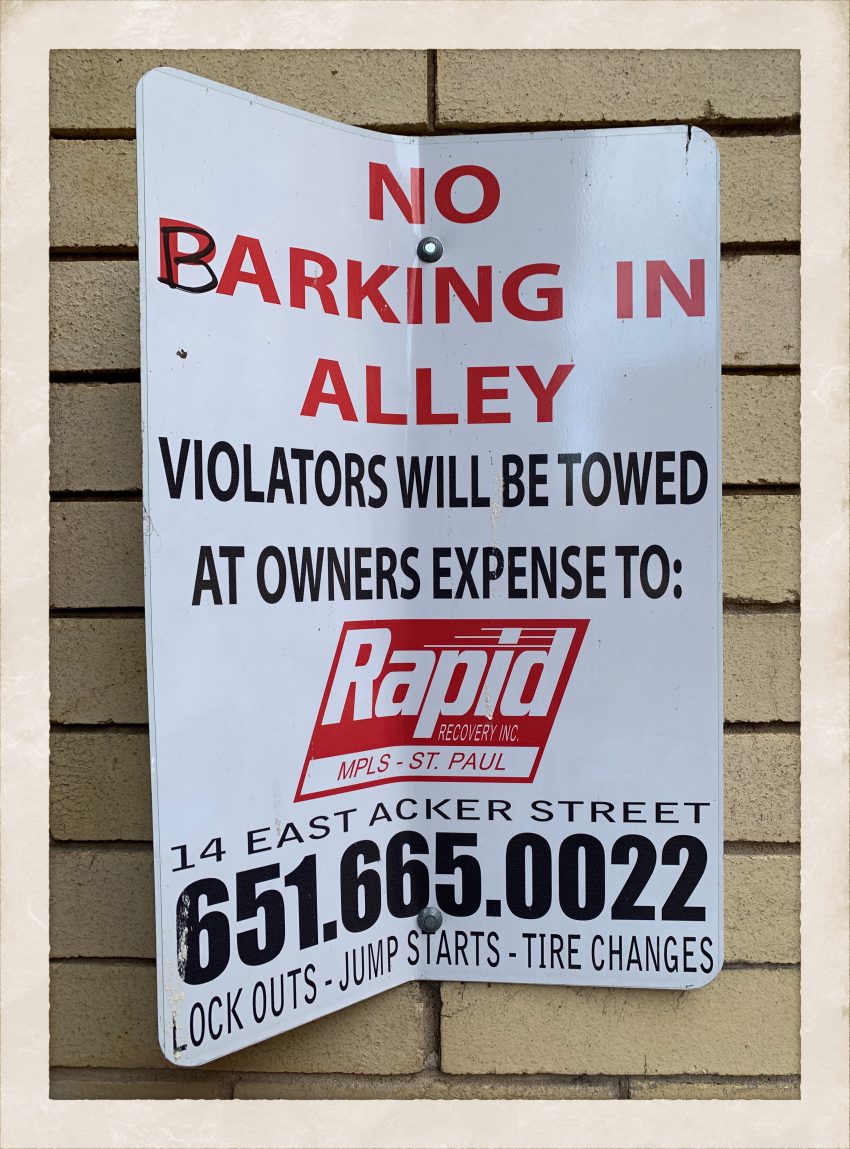 Sights and sounds of Lowertown 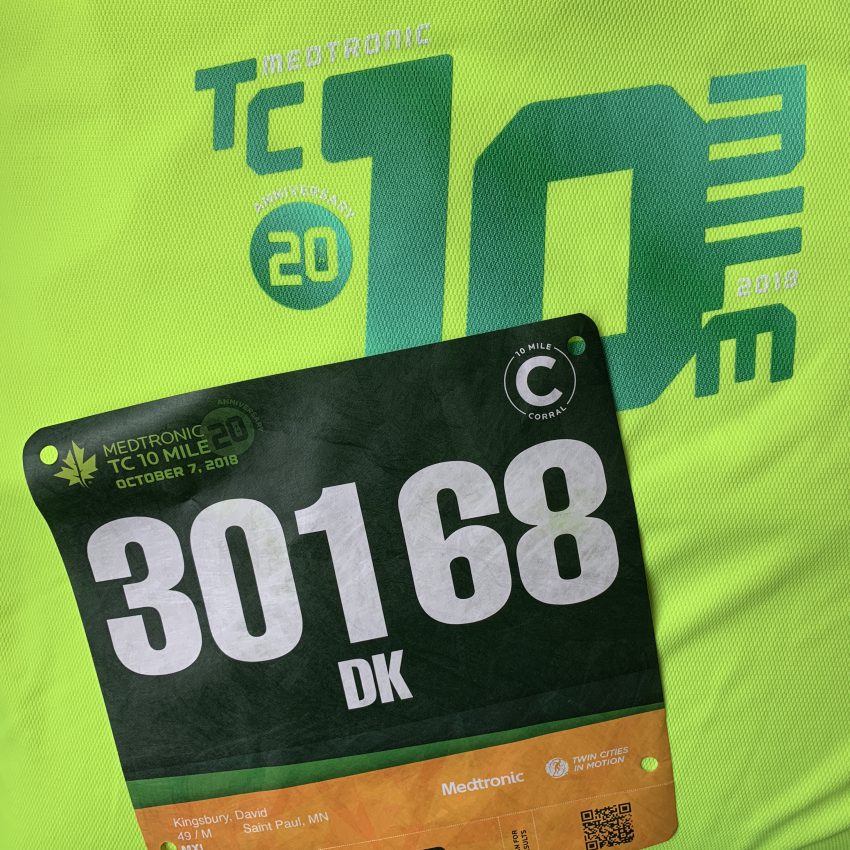 Before I get to the big post, let’s look at the day before. My friend and colleague Katie decided that we would take advantage of not having a football game on marathon Sunday for the first time since the stadium opened by entering the TC 10 Mile lottery. I’ve done this race once before (2003) and knew it was a fairly tough entry to get. Amazingly, we were both selected and placed in corral C. We were thinking about a ten minute mile goal and set about creating a brief training schedule of short runs during the week and a longer run on weekends that we would increase each week.

Since I’m now a terrible training partner, we only managed two long weekend runs: one rainy seven miler around the lakes in Minneapolis and one eight miler along the Mississippi. Combined with some bike cross training, I was OK with this and felt fine with our prep on race morning. The four corral setup was different than 2003 and was really nice – we basically started right in the middle of the Commons before heading towards the river. It was also interesting to see how they used the Vikings Longhouse for VIP runners.

The weather and the race itself were both very nice. We ran a leisurely 10:49 pace, finishing right around the 1:48 mark (Katie results, DK results). The medals this year were very nice and the finish line food was excellent, as usual. We both felt fine after the race and walked back down the hill to our brunch reservations at Parlour St. Paul. Colleen picked us up afterwards and we dropped off Katie at her house. I remember watching the Vikings beat the Eagles and getting up for work the next day, but then I basically don’t remember anything that happened the next three days (more on that coming soon). A few race day pics after the jump.

We are all back in the game 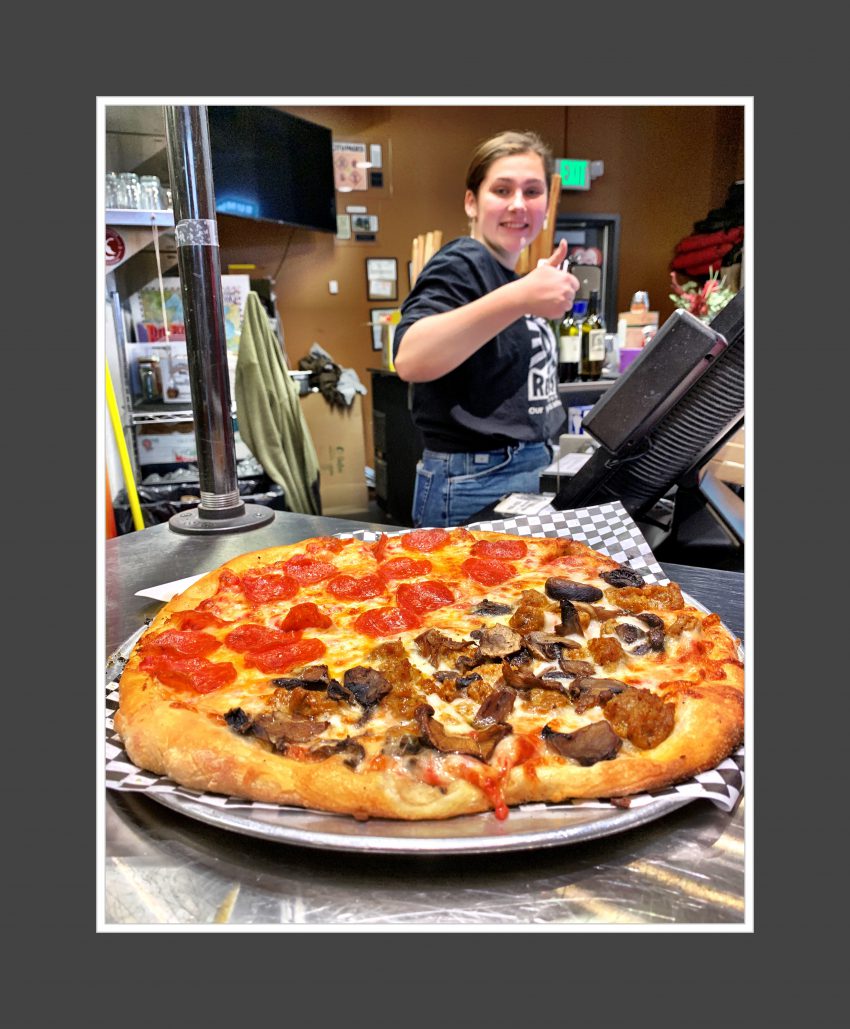 Pizza night in the neighborhood 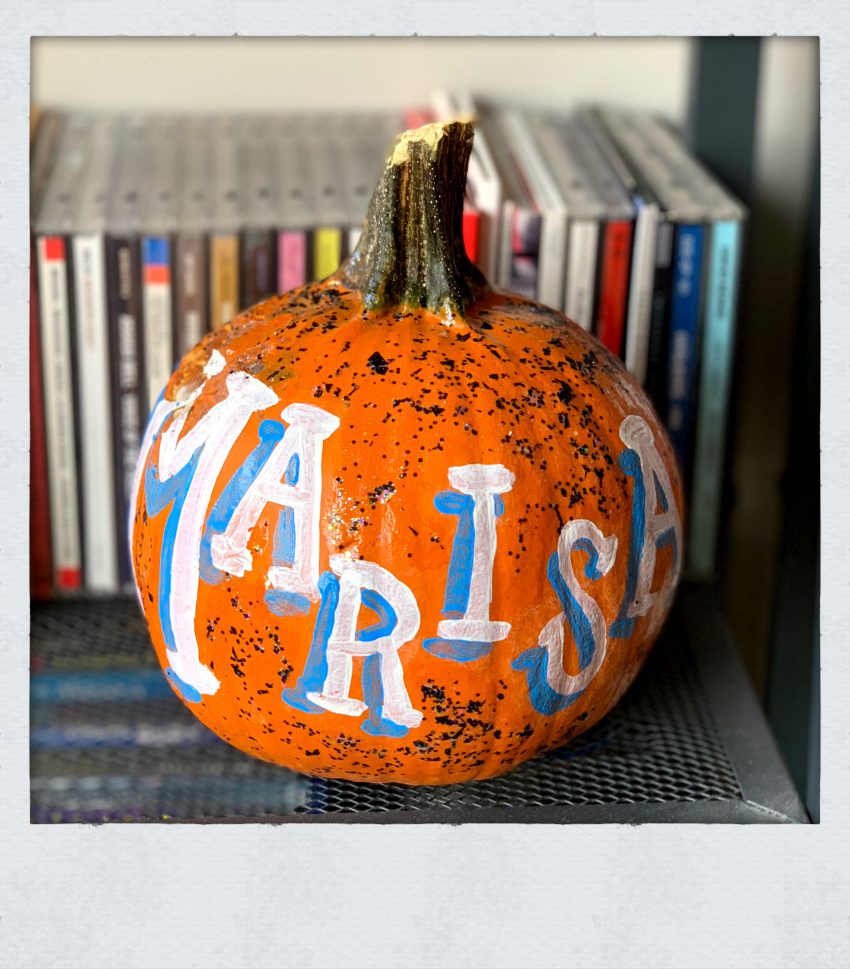 We won’t have any kids, but so happy to be here

NotATweet: Never been so happy to be home 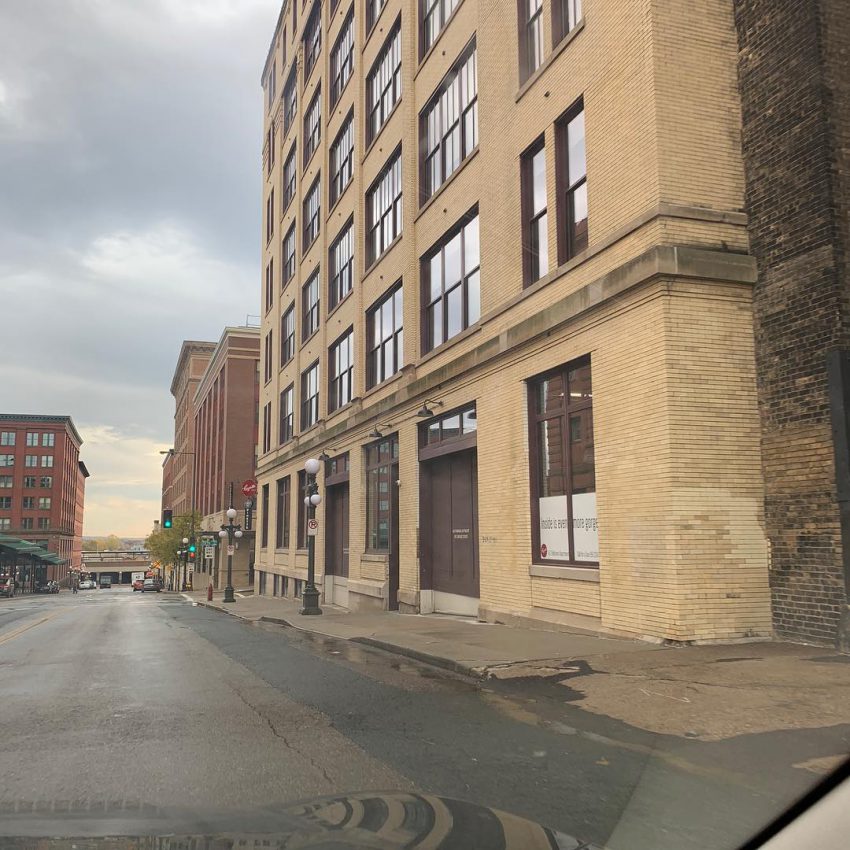 Waiting for the final paperwork 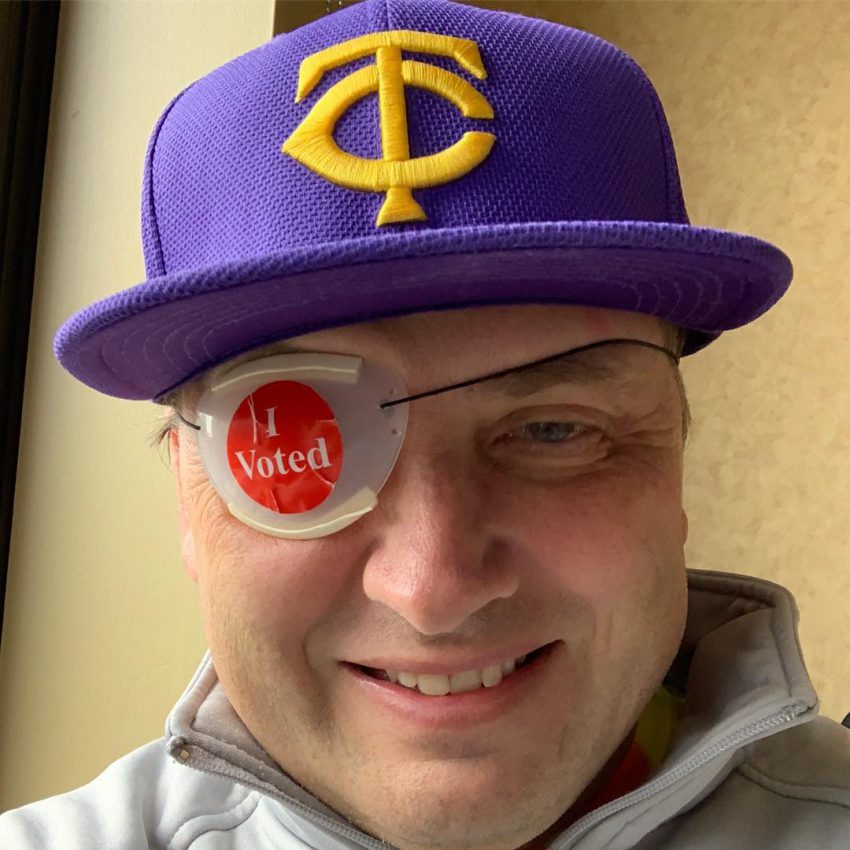 Can’t wait to rejoin this foursome 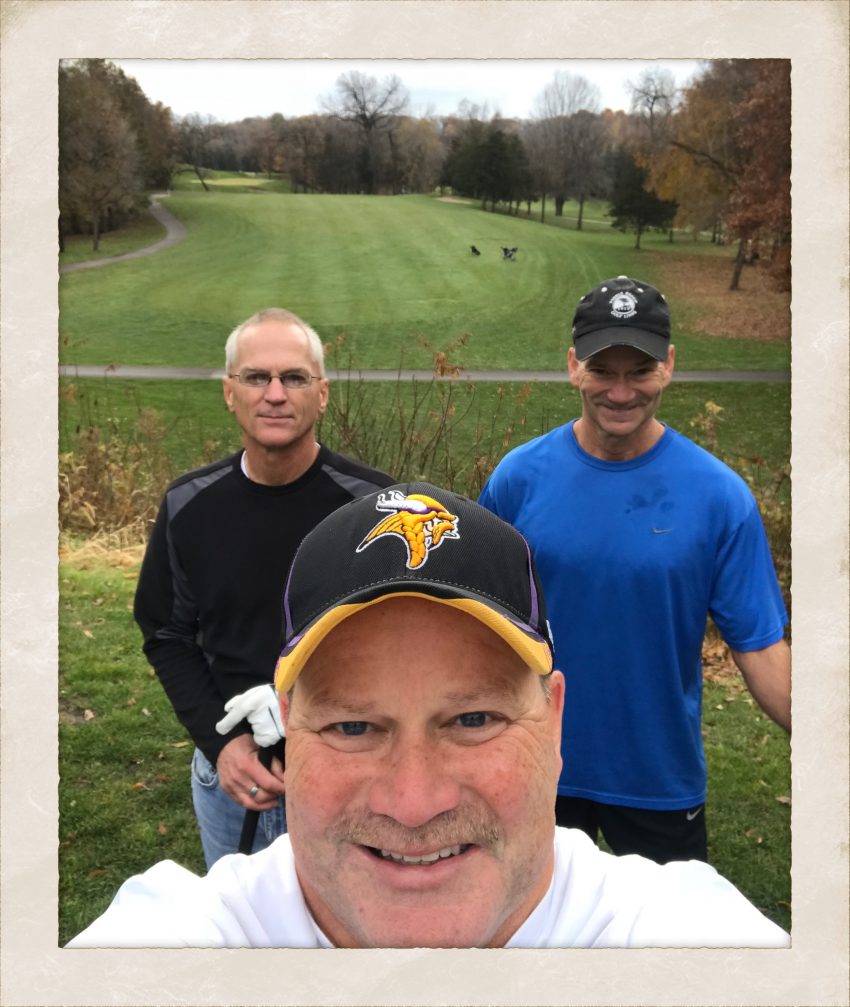 Out of SICU (and look at that view!) 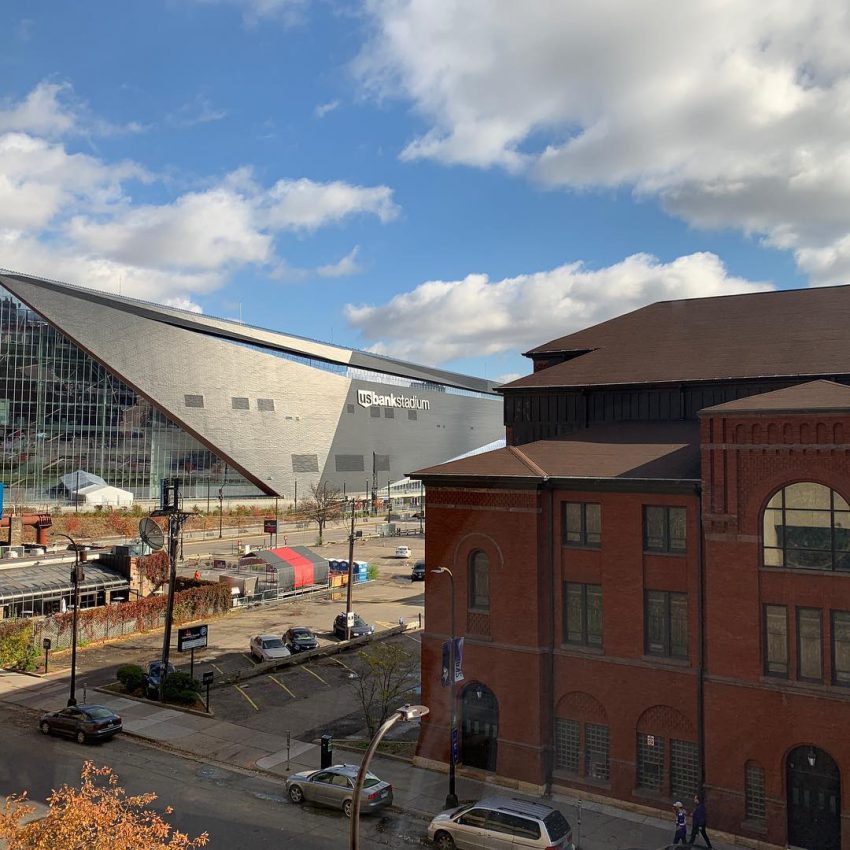 I ❤️ the people I work with 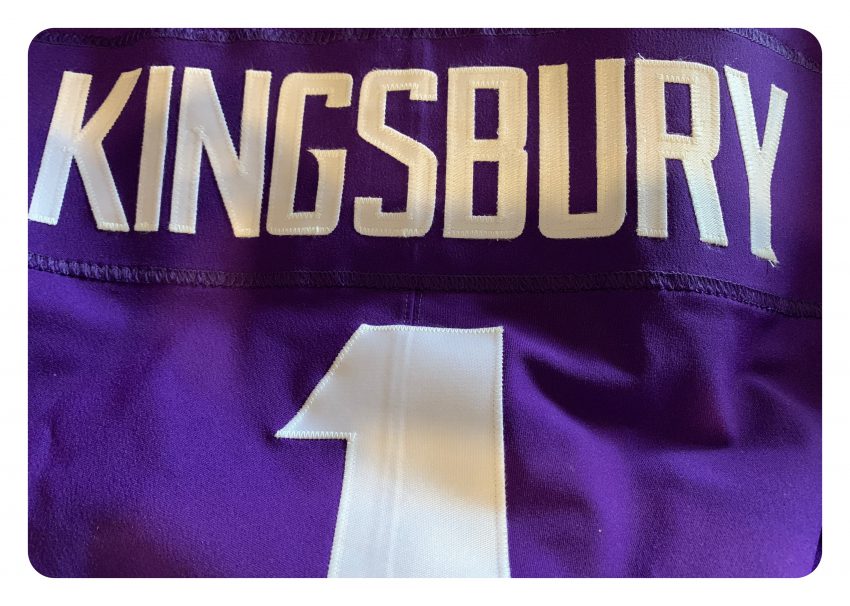 Why are the ads still playing? 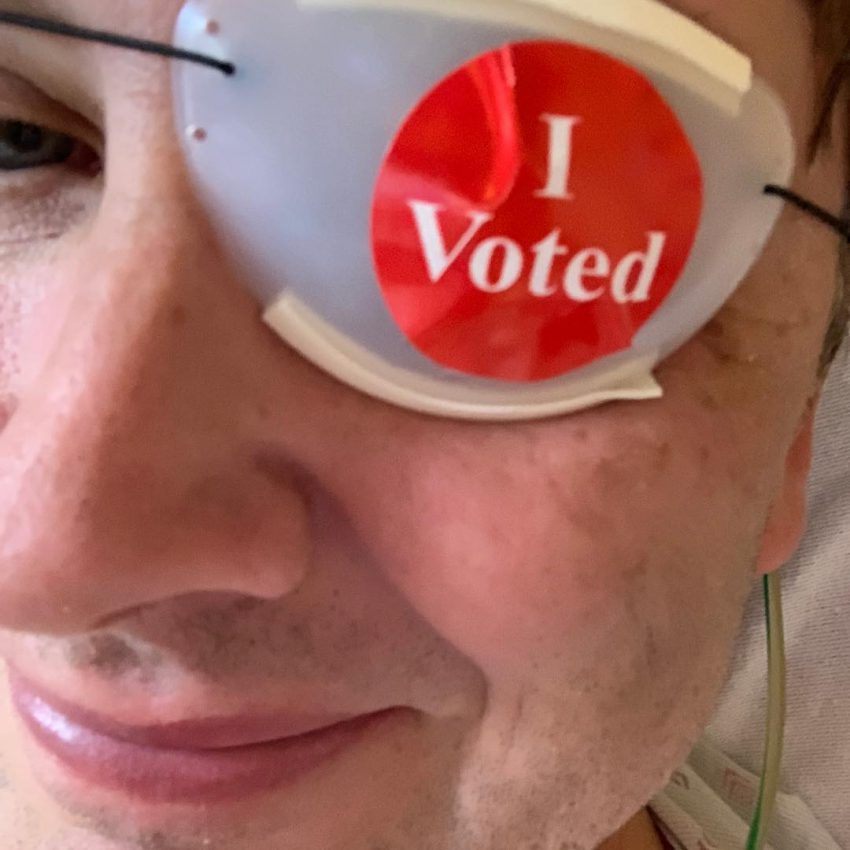 Man, they will let anyone in here… 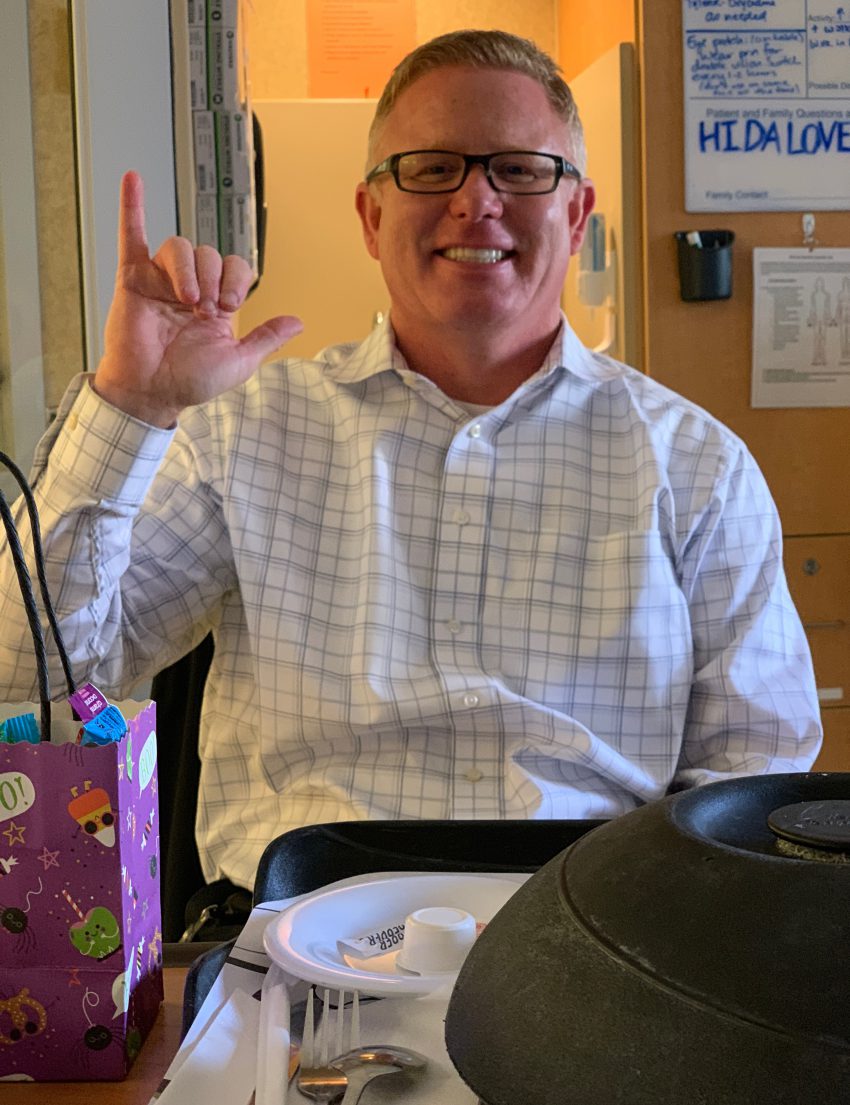 Caring Bridge is A+ tech

Not the best Vikings game day experience, but I literally owe my life to the amazing men and women of the ICU 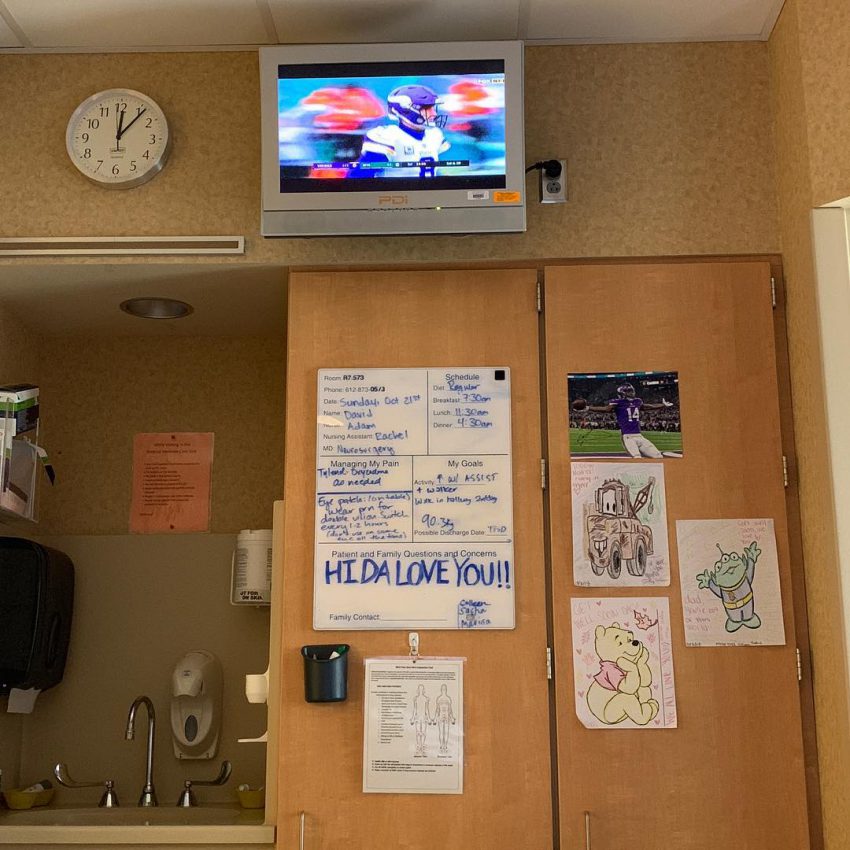 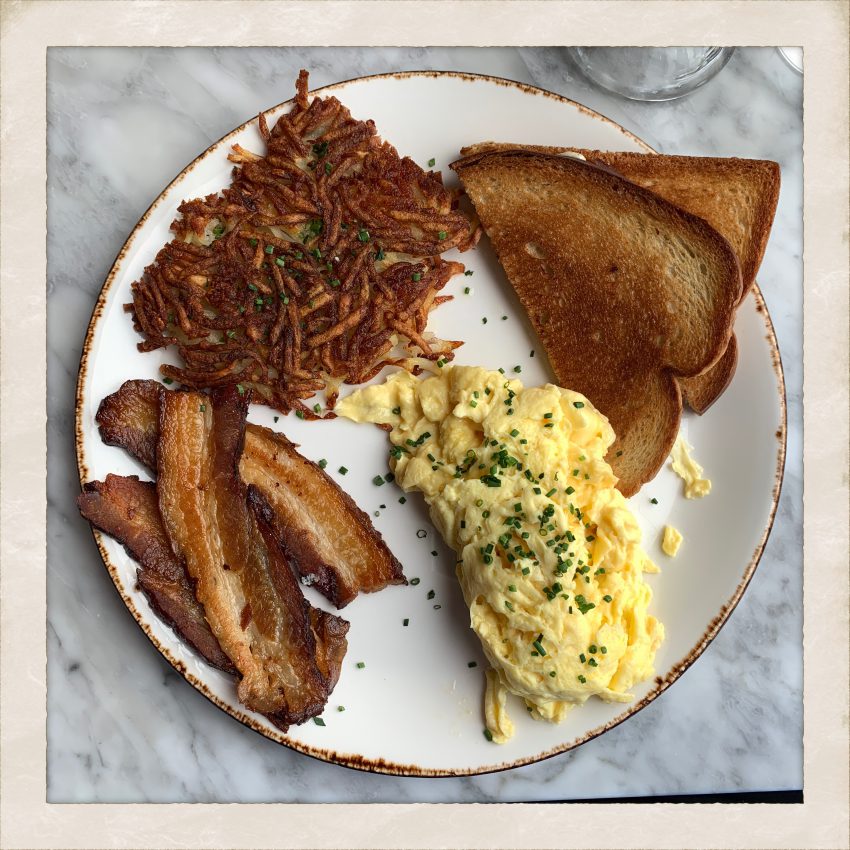 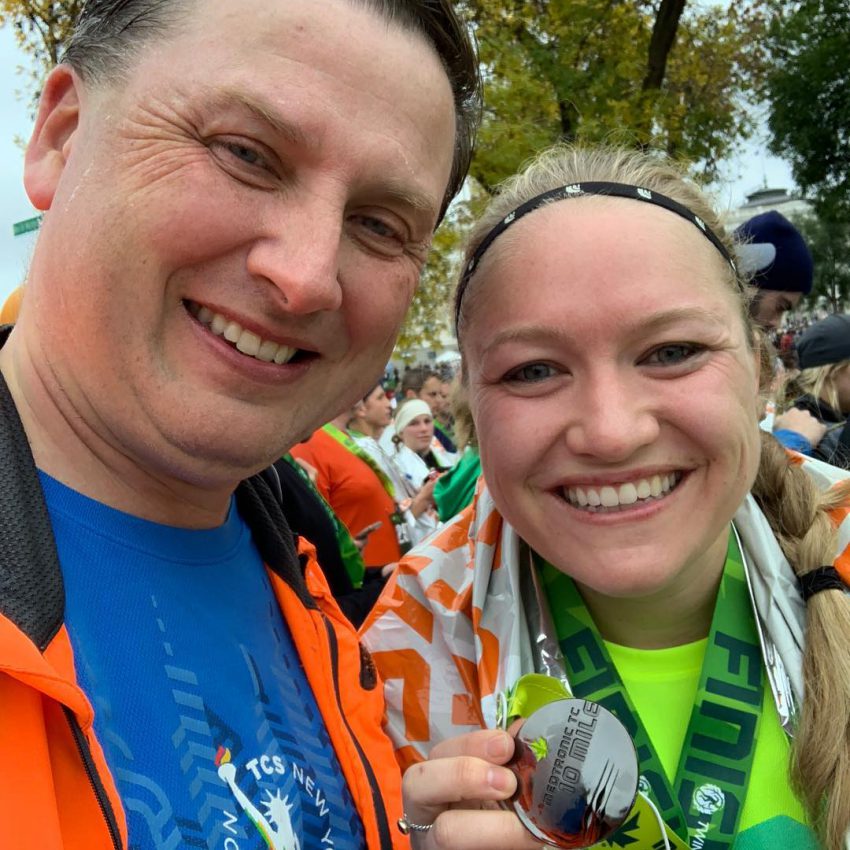 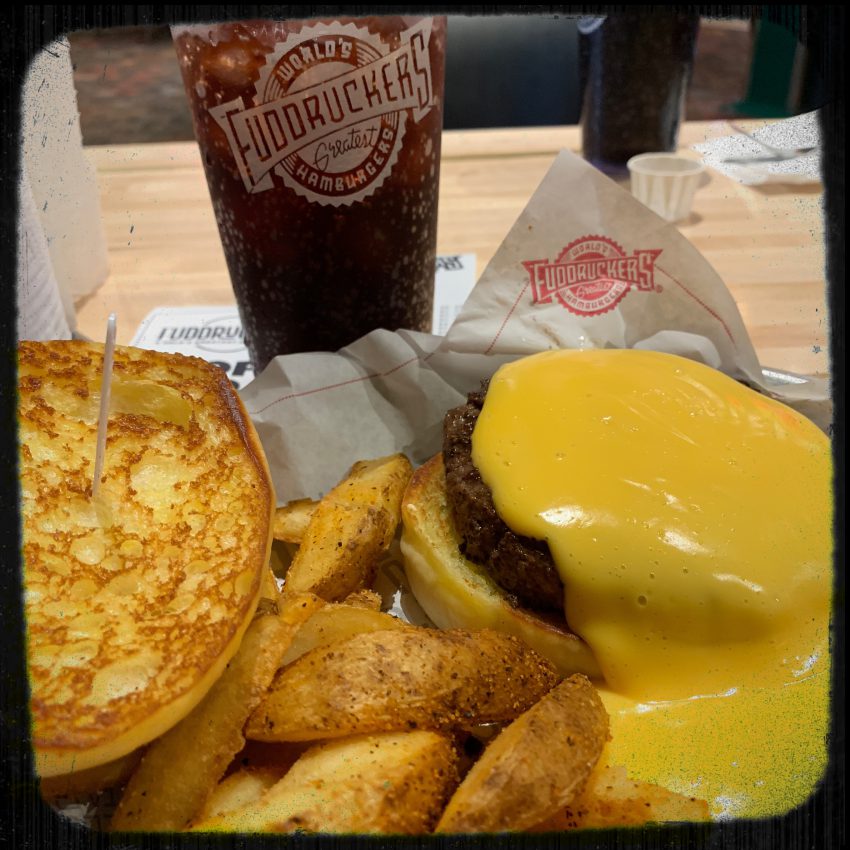 Back with my people 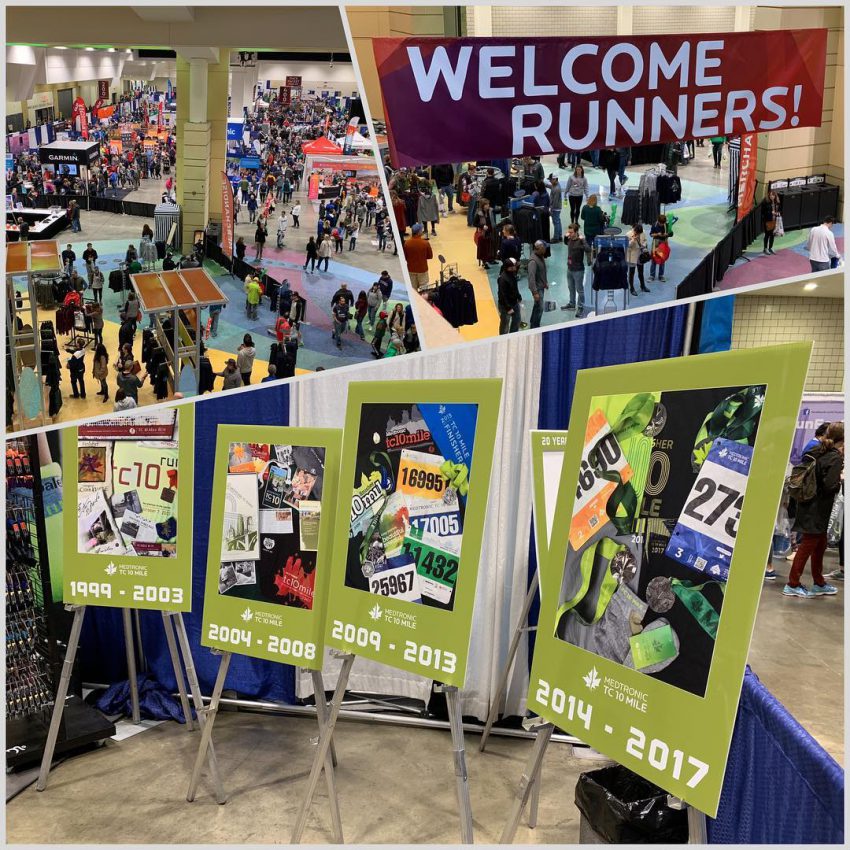 The Orchid loves me again

And I even left with most of it – thanks, Mystic Lake

Shot on iPhone, but… 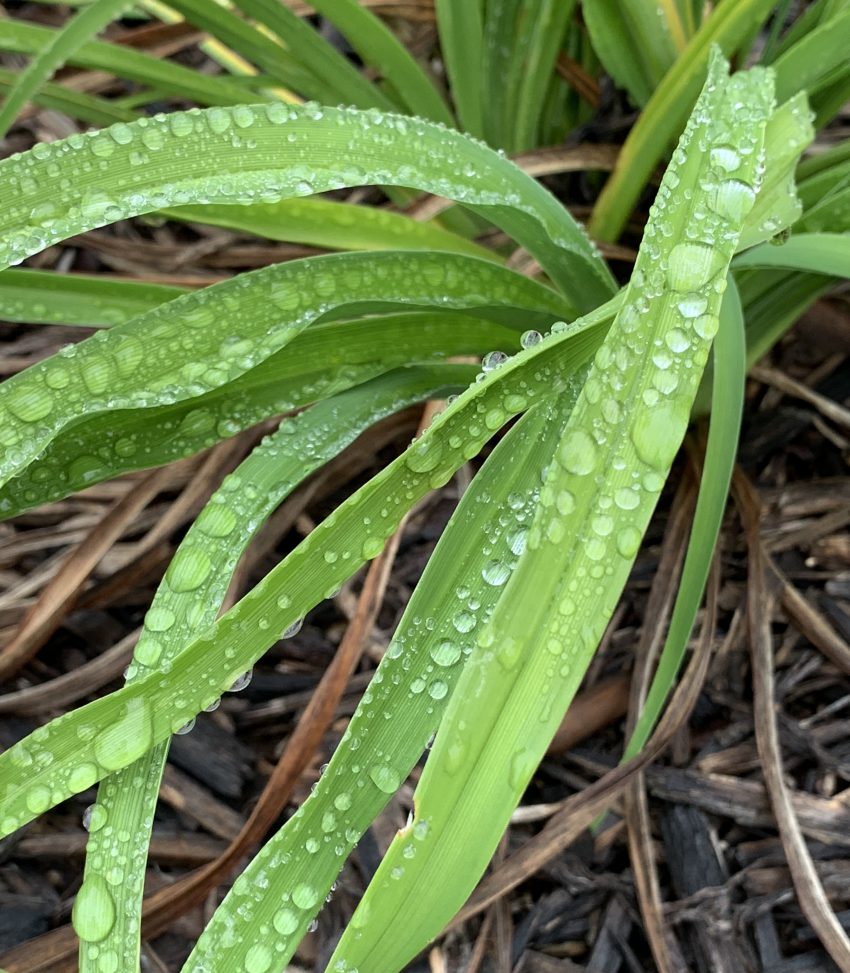 …how many times does it get compressed or down-sampled? 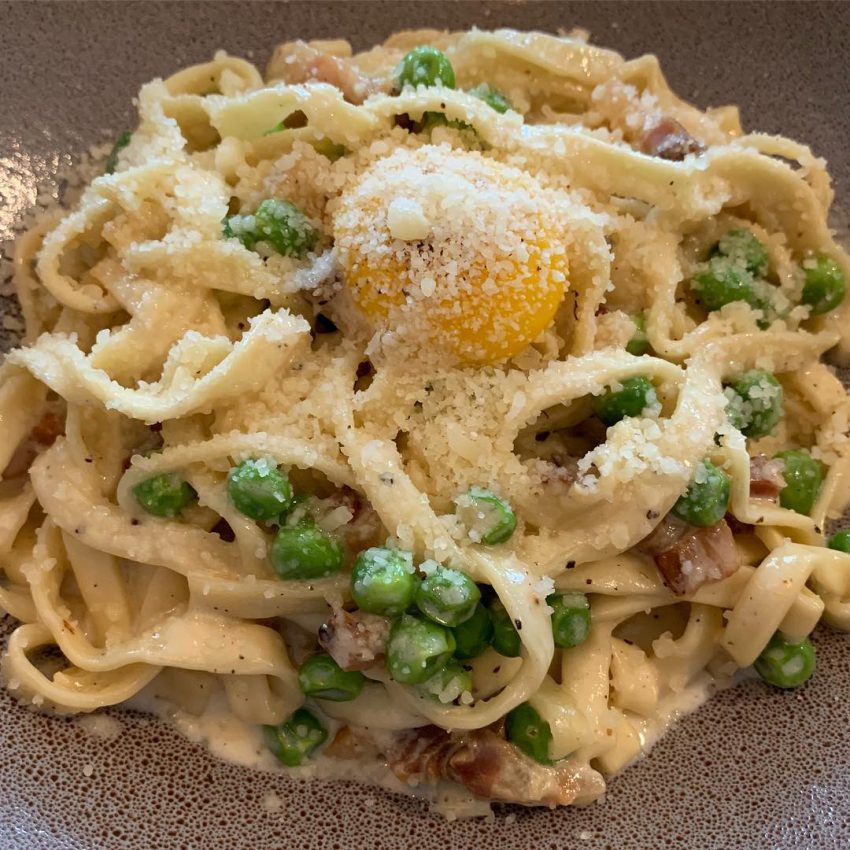 NotATweet: Thumbs up on Disenchantment

Word on the street was bad for Disenchantment, but I really liked it (plus music by Mark Mothersbaugh!)

Running out of school conferences 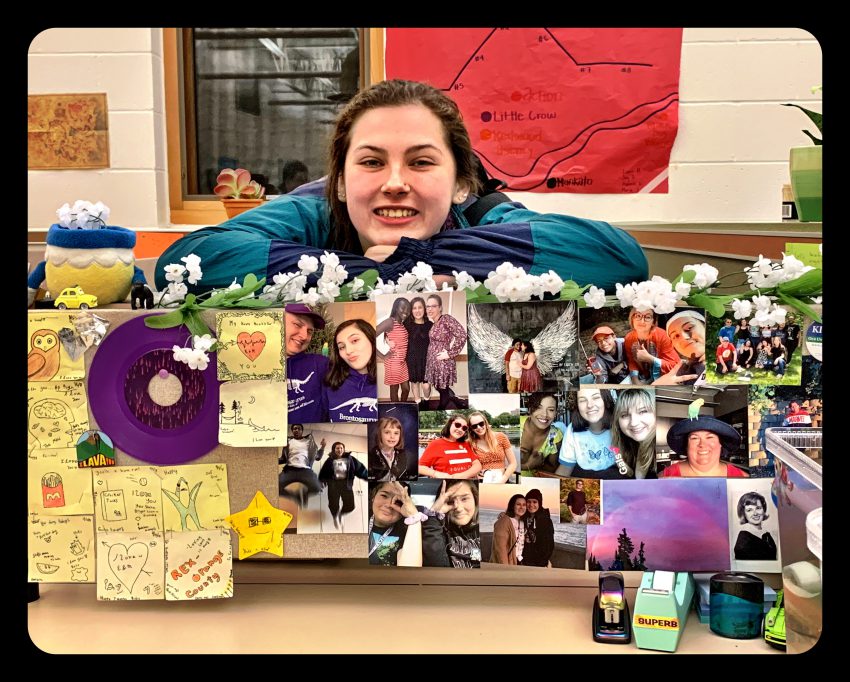 This is waaay too close to my house 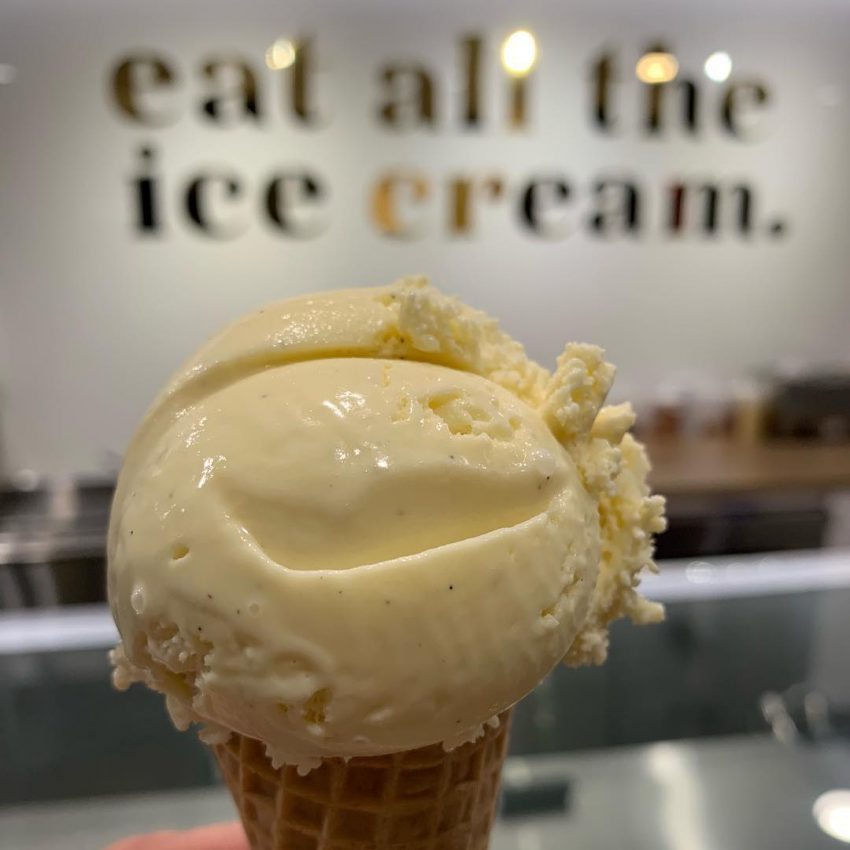 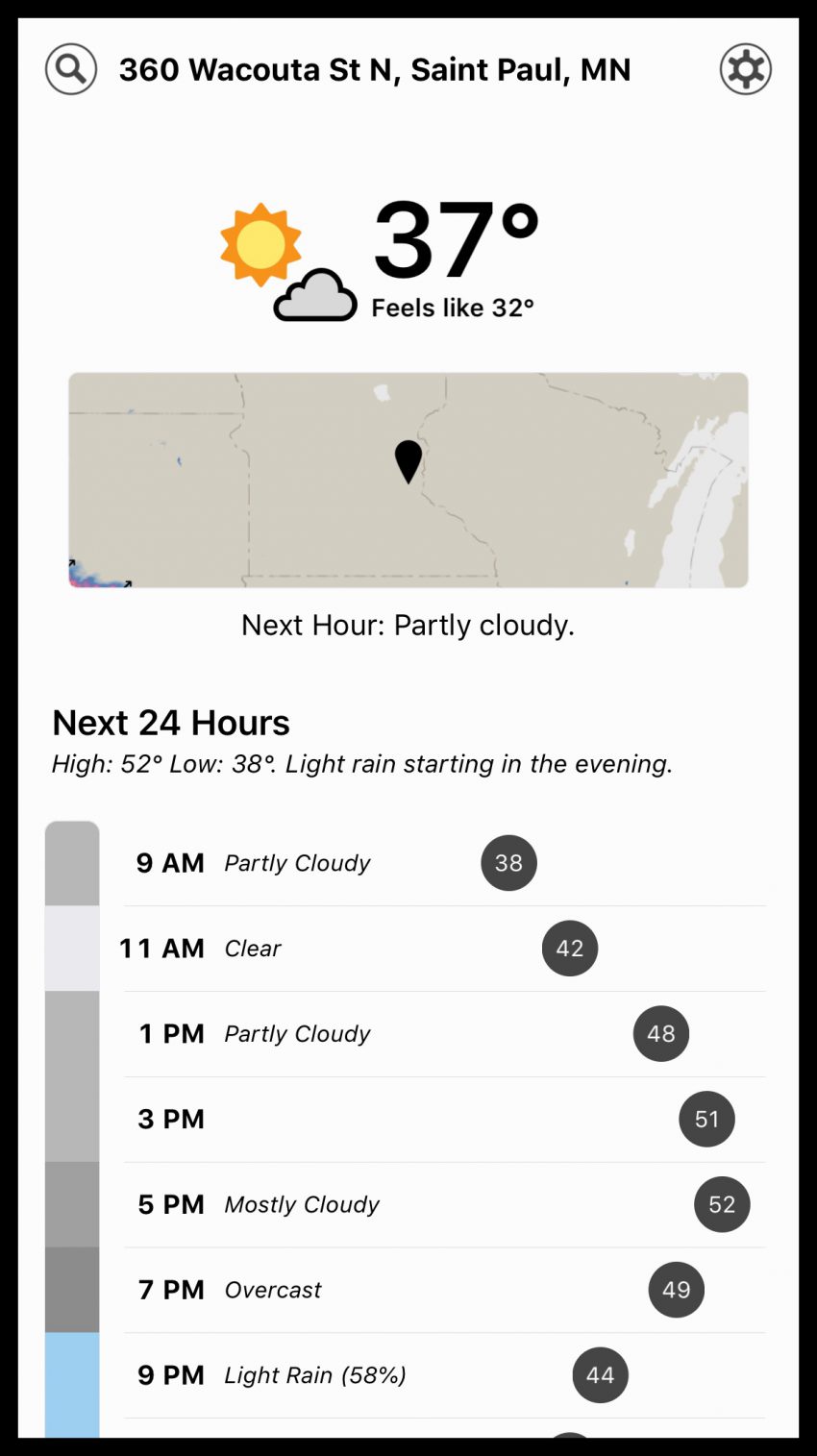 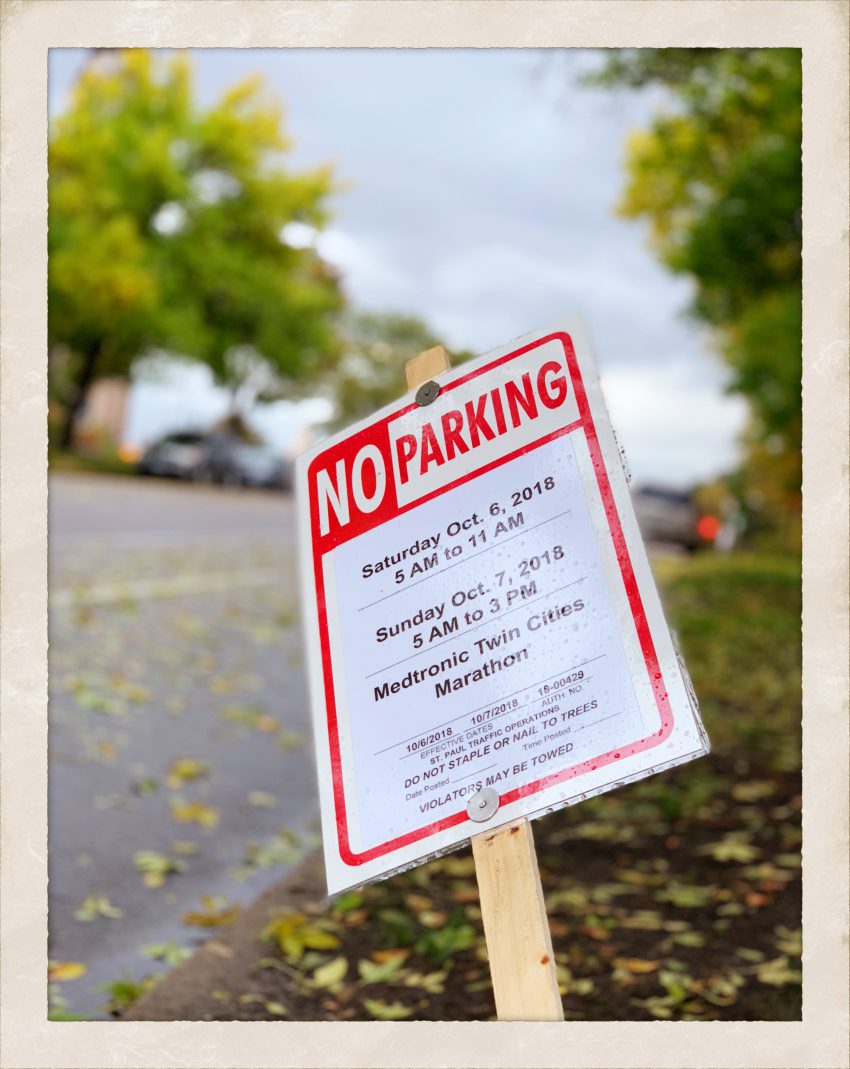 Hoping for a triumphant return to racing at the TC10

And it’s all in my pocket!

Quiet at the office 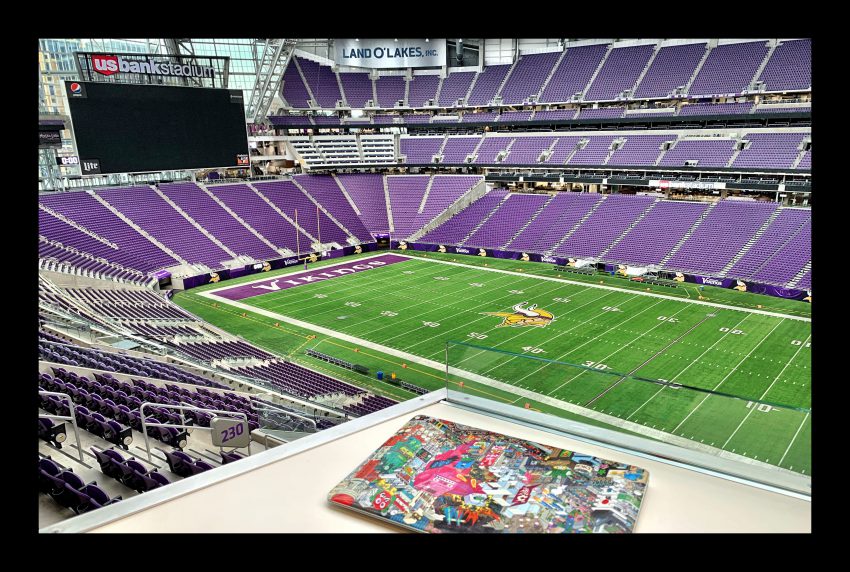 Press box can be a very productive spot 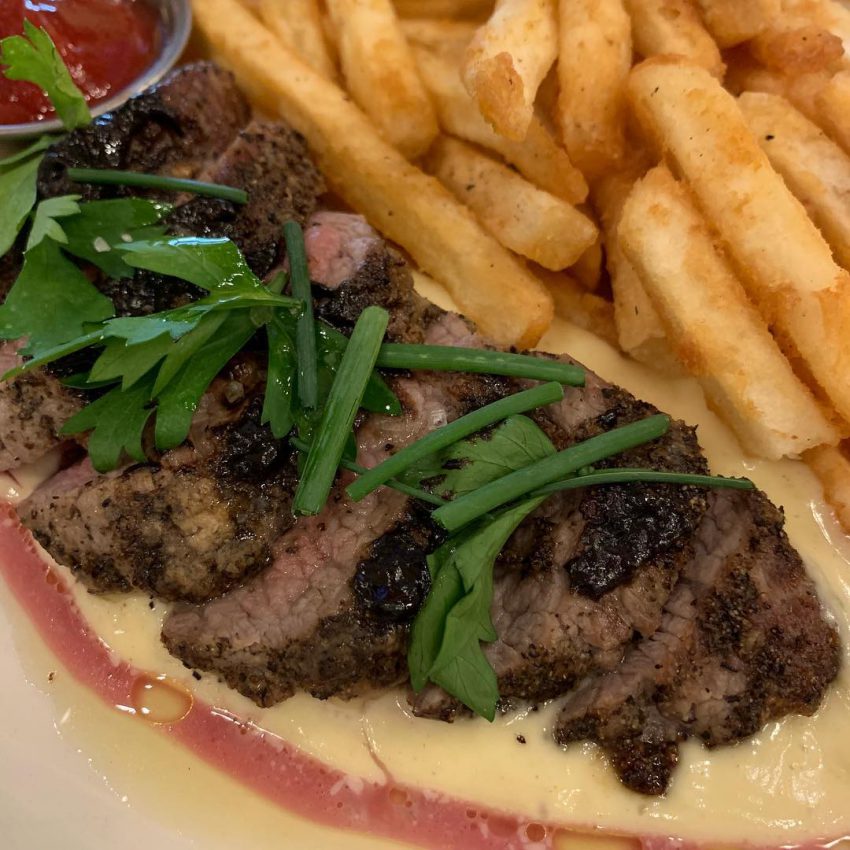 They’re dying to meet you 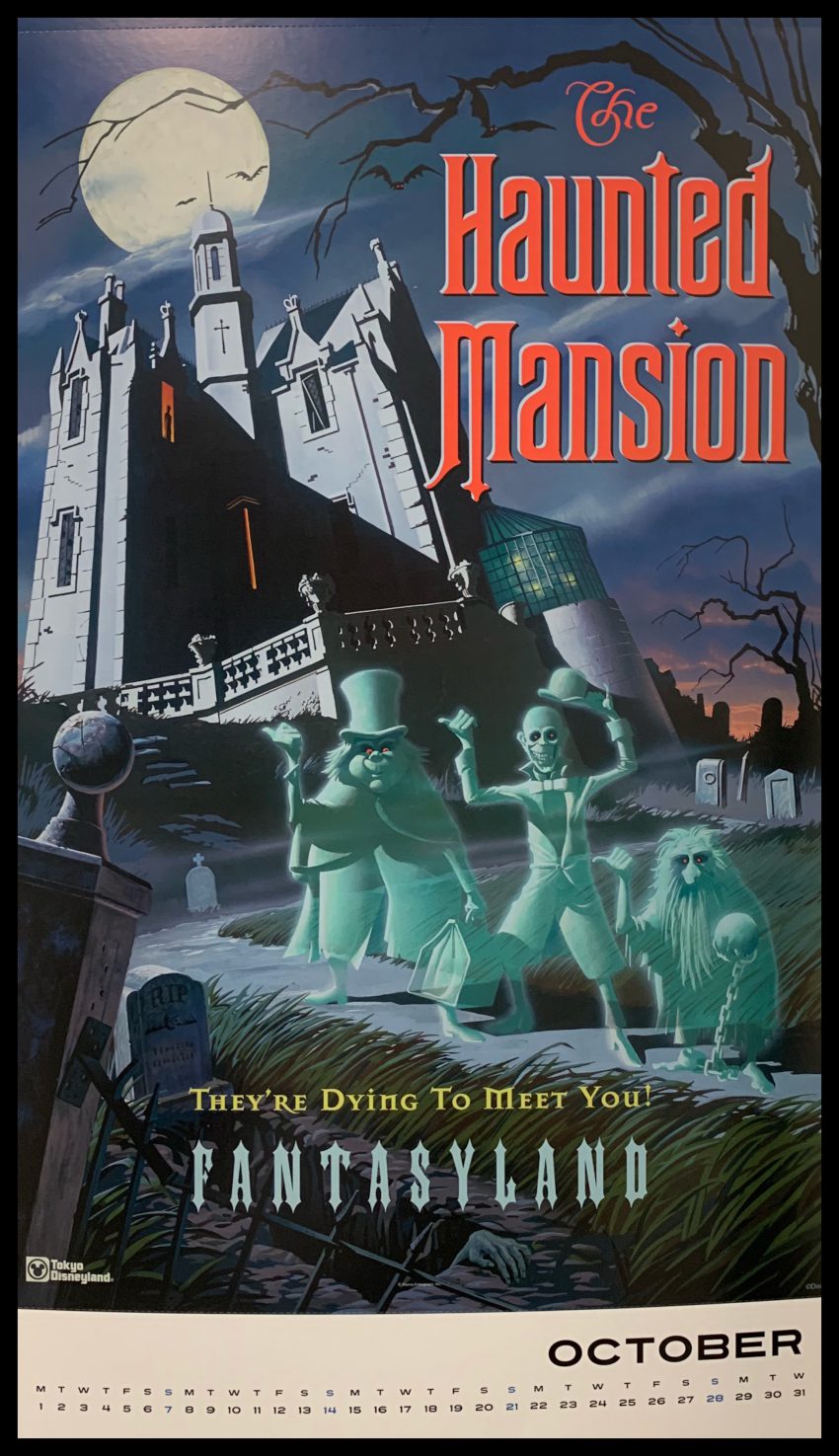