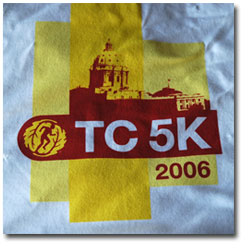 This morning my oldest child and I ran the Twin Cities 5K, starting and finishing at the state capital. It was her first race of this length and we finished in just under 39 minutes. I’m such a proud running dad!

This makes me even more motivated to do well tomorrow, which is starting to look like it is going to be too hot. The blisters this morning were fine, though, so I’m in a good state of mind overall. Now I’m off to one final round of marathon golf training at Willinger’s this afternoon…DK

Great Corporate Desks Without The Hassle

Our desks are almost ready to go in the new office space. These setups are just like directors used to have at my last job, but I don’t have to put up with any big company hassles. Sitting behind them brought a huge smile to my face all day long.

The past two weeks were really busy–the painting was finished, the projector arrived, carpet and baseboards were installed, a hole was punched through the outside wall for the air conditioner, the electrician came to wire the AC with the special plug it needed, window blinds were ordered, phone lines were pulled and Comcast installed our business class internet access. I moved the rest of my boxes out of the old office and unpacked them yesterday.

We made a few trips to IKEA and Target and today we ordered our new red leather coaches for the coders lounge. There still seems to be a lot of items on the to-do list, but it’s finally starting to come together. More pictures soon…DK

The Yard is Changing

Hooray–fall colors have arrived in our yard! I’ve been so busy the past few weeks with the new office, I literally needed to stop and smell the roses today. I read that this is the last weekend of good colors on the North Shore and I hope we can get out for a roadtrip somewhere in the region before they are all gone.

Weather for the Twin Cities Marathon on Sunday looks OK–overnight low around 45/high near 75–and the colors along the Mississippi River should be fun to see. Hopefully I won’t be too focused on leg cramps and blisters to notice…DK

Today we took the family to visit the Minnesota Renaissance Festival outside of Shakopee. The weather was great, the crowds were large and the turkey leg was tasty. We also visited with artist John Lange of Fountain City, Wisconsin, who makes the most beautiful copper tree sculptures. I hope to make a deposit soon on a 53-inch bare tree scultpture for the dining room wall…DK

This morning I ran what will likely be my last longer training run before the Twin Cities Marathon. I ran with a group that was following the course for the TC 10 Mile race, held the same morning as the full marathon. I was quite happy with my pace and time (10:14 minute miles) and felt OK afterwards. At least until I discovered that I had some of the worst blisters I’ve had in years. I need to figure out something for race day, which is now less than two weeks away…DK

This week I had a troubling issue at work I’ve never seen in all my years of working with technology. Making matters even more frustrating, it just cleared up by itself today with no action on my part.

HSRA has a number of security cameras set up to record digitally to two servers. Those servers record motion-sensitive movies and take a still shot of each camera every 30 seconds. The application uses a standard ftp file transfer to move those still images to a web server. On Tuesday night, I noticed that the cameras showed students in the building, but upon closer inspection, saw that the time stamp on the photos was from earlier that morning.

I fired up VPN Tracker to connect to the school’s network. Both security camera servers were up and running, so I used Apple Remote Desktop to take over the screen of each one. I noticed that all the cameras were recording video, but the ftp file transfers were stuck on “logging in.” I checked the web server and ftp appeared to be running fine with nothing unusual in the logs. Thinking it was maybe a password issue, I changed the password and tried the ftp transfer again. Nothing.

Next, I tried to connect to the web server using AFP. The login window appeared right away and the file window popped up with no delay at all. For kicks, I decided to restart all three servers. Still no change, so I decided I would wait until the morning to power cycle the Sonicwall device we use for firewall/NAT/filtering, which has cleared up wonky network issues in the past (even though it really shouldn’t be a cause for internal LAN service items).

When I arrived at school, I went to the server room and immediately restarted the Sonicwall. I then restarted the security servers and looked at the ftp status window. Still stuck at login. I opened a terminal window and tried to do a manual ftp connection to the web server. After about 30 seconds, the attempt timed out and failed. I tried Transmit (a GUI-based ftp client) on my laptop to attempt an ftp connection to the web server and it also failed, but got a little bit further in the login process. I tried it several times and was able to make a successful connection about once out of every five tries.

This really had me stumped. After power cycling the Sonicwall and the servers again, I remembered that our gigabit switches had caused weird things before and decided to power cycle them too. All that caused was a few additional problems with printers, file server logins and internet access that were easily fixed by client restarts.

I decided to really study the Sonicwall via the admin interface and the log settings. Everything seemed to be functioning normally. I cruised through their support forums and ended up writing my own post there. I received a reply from the moderator that said local services on the subnet should not be impacted by the Sonicwall, just as I had earlier suspected.

Final step that day was to ping my network guru friend Chuck Goolsbee of Digital Forest. He said the same thing as the Sonicwall moderator and that I should try to isolate the issue before replacing network components (I have a spare Cisco 1712 router and considered swapping that with the Sonicwall). Dejected and tired, I left for the day.

When I arrived the next morning, things were still the same. I started reading about paid support options with Sonicwall, the feature-set of the Cisco unit, alternate filtering and firewall options like Dan’s Guardian and IPcop and anything else I could do to either fix this or get a working replacement. Out of the corner of my eye, I noticed the ftp status windows on the security servers started flashing activity! Without me touching anything, ftp just started working (and has continued to do so since then).

The network gnomes have left the building, at least for now…DK

Computer details: This is my wife’s home machine and was purchased May 24, 2005 from Amazon (part#M9843LL/A, 1.8 GHz PowerPC G5, 512 MB RAM, 160 GB Hard Drive, DVD/CD-RW Drive). Another 512MB of RAM was purchased from Other World Computing, for a total of 1GB. Everything works great–she just wants a laptop for graduate school and has ordered a MacBook. The trackball is not included, but I will throw in the external iSight camera with the original keyboard and mouse. eBay says it’s worth about $800.

Burley details: Purchased about three years ago from Penn Cycle in Eagan, this nice bike trailer seats two small children and has a “trunk” in back for groceries or books. It folds flat for easy storage or transport and was lightly used (the kids are too big now). We did not buy the stroller attachment, but that would be easy to find used. Here is the original product page from Burley. eBay says this is worth about $200.

UPDATE: both items have sold…DK

Happy 60th Birthday to My Dad 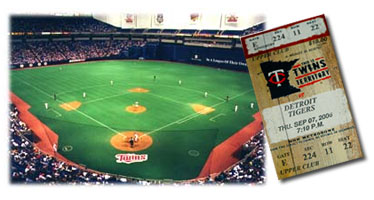 My dad turned 60 last week and we really surprised him (even though I almost blew it the night before). I told him I was taking him to the Twins game against Detroit and out for dinner before the game. We also told him my sister couldn’t get off of work (in Duluth) and that my brother wasn’t able to visit (from Orlando).

My brother had arranged to use frequent flier miles for a ticket, though, and I picked him up at 1:30. My sister also drove down from Duluth and we all surprised my mom while she was watching my kids after school. I purchased five tickets to the game, so I took two, while my brother, sister and mom snuck in the Metrodome while my dad and I were at dinner. We had my brother come up from behind us so he could tap my dad on the shoulder and tell him he was in his seat. It took him a few moments of fumbling for his ticket stub before he realized who it was.

Despite the Twins not coming through with a win, we all had a good night. My sister arranged to have a happy birthday message displayed on the scoreboard, which we saw during the sixth inning (and should get an emailed photo of soon). We had a nice dinner the following night too at Cherokee Sirloin Room in Eagan with a few more friends and family.

Next milestone birthday: my uncle in Spokane turns 60 in December…DK

The kids started lessons again at Wise Swim School in Apple Valley this weekend. I just love the programs and instructors at this school–highly recommended…DK

Today Apple announced revisions to the iMac line of consumer desktop computers. Processor upgrades are always nice, but the big news was the new top model, the 24-inch iMac. To me, this seems to be a great value at $1999 ($1899 education pricing). That was the price of a 23-inch flat panel monitor by itself not that long ago.

While the standard config is great out of the box for almost any user (2.16GHz Intel Core 2 Duo Processor, 1GB of RAM, 250GB hard drive, 8X SuperDrive, 128MB NVIDIA GeForce 7300 graphics card and Firewire 800), the options to max out the machine only add another $1200 or so (education pricing). That would upgrade the processor to a 2.33GHz Core 2 Duo, increase RAM to 3GB, up the hard drive to 500GB and switch to a 256MB NVIDIA GeForce 7600 GT graphics card. Not sure why they list 3GB instead of 4GB as the max RAM–there are two slots and the 3GB is listed as 1x2GB, 1x1GB.

We have several of the pre-Intel iMacs at the school and have been very happy with this form factor. My wife purchased a 17-inch 1.8GHz iMac G5 last year that we are getting ready to sell (she ordered a black MacBook portable for her return to grad school this fall). It’s been a great unit: 1GB of RAM, 160GB hard drive, combo drive and Airport/Bluetooth wireless. Looks like eBay says it should sell for $650 or so. Anyone interested before I list it? Drop me a line if you’d like to know more…DK