The Tale of the IKEA Bookshelf 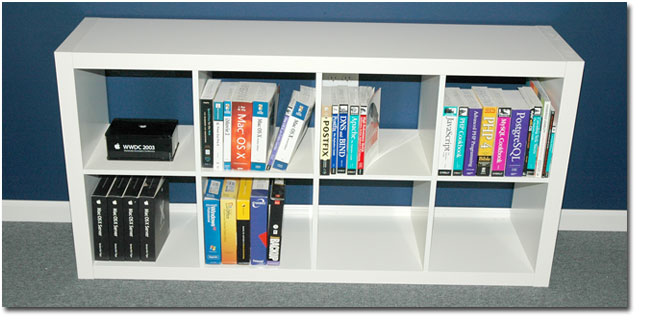 Our local IKEA store had the perfect bookshelf for our new office (see above). I generally like most things about IKEA, but this purchase was one of the most frustrating shopping experiences I’ve had in a long time.

On my first trip there, I bought a bunch of other things and decided to wait to get the bookshelf until I had more room in the car. When I went back the next day, there was no more stock on the floor. I saw two pallets loaded with units directly above the empty spot, though, so I went to ask a clerk to have one pulled down. That’s when the fun started.

IKEA is a busy store and because of that, they have a policy of no forklifts on the floor during store hours. I was frustrated, but understood. The clerk said it would be pulled down overnight and would be available for pickup the next day. I wasn’t able to go back for about three days, but when I returned, the pallets were still in the same places with no stock on the floor. This was on a Saturday, which made the trip all the more stressful anyway.

The clerk on duty was apologetic and went to talk it over with a supervisor. Their inventory system showed 10 units on the floor, so it wasn’t requesting that more be brought down. They said I could pay for one now and they would do a “911 pick” right after the store closed and I could come back at 9:30pm to get it. My other option was to come back the next day, when they promised it would be pulled down. I decided to get the phone number of the desk on the floor and told them I would call before I came back to make sure they were really available.

The next day, I got a clerk that went to check and he said they were “out of stock” and they were expecting a delivery the next day. I told him there are two pallets of them right above the empty spot and he told me he would check and make sure they were ready tomorrow. Sigh.

My now daily call the following day was answered by the same clerk I had the day before. I don’t think he recognized me and said the truck they were expecting hadn’t arrived yet. Again I told him of the pallets above and to please make sure they are added to the overnight pick list.

The next day I was traveling from St. Paul to Northfield for a meeting. IKEA was on the route back to St. Paul, so I decided to stop in and complain to the store manager. Lo and behold, one of the two pallets had been brought down!

If this particular bookshelf hadn’t been such a great match style- and price-wise, I would have went elsewhere after that first day. Oh well, it looks great now…DK