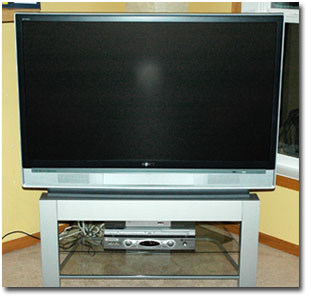 Our TV for the past 12 years, a 42-inch Sony rear-projection CRT model, finally gave up the ghost. Best Buy had some good deals over the President’s Day weekend, so it was time for me to finish researching HD and decide. It also helped that we received a nice tax refund and a 24 month interest-free financing offer.

After many hours of reading pages at the AVS Forum site, I decided on a 50-inch Sony Grand Wega SXRD rear-projection 1080p unit (KDS-50A2000). The owner’s thread for this model at that site is more than 300 pages! That is a great reference site, but it can be a little overwhelming.

My goals were to find something that had the following traits:

This model wasn’t the $6,000 unit I’ve been lusting after, but I think it’s a nice compromise. Due to the snowstorm last weekend, Best Buy had to delay the delivery by a few days. It came on Tuesday this week and I’ve spent the past few days tweaking, moving components around, buying new cables at Target (twice) and visiting the Comcast store to pick up an HD cable box.

I wish there was more HD programming, but I guess that’s coming. This site provides a nice guide to local sports programming in HD, which is what I’m most interested in. There are also a number of HD On Demand options from Comcast, including Versus hockey highlights and a limited selection of free HD movies.