The Snow Drought Is Over 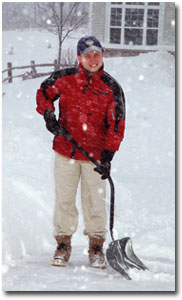 Before this week, we were around two feet below our normal seasonal snowfall. All of the big storms this year had gone around us–until last weekend. I’d estimate we received about a foot then and today was part two, with another nine inches (and it’s still coming down).

The plows in Eagan have been timely and thorough (although I suppose it helps to have no cars parked on most streets). I put the snowblower away today so I could get some exercise and the plows helped out by pushing the heavy, wet stuff to the end of the driveway.

I made it in to the office today for a 9:30 meeting, but left at lunchtime. Driving was horrible, with most streets in St. Paul covered with a nice sheet of ice. I almost got into a multi-car pileup that was hiding around the bend of a single lane freeway entrance. I was only going about 30mph, but the anti-lock brakes on the Mini had to work overtime to stop in time. Fun!