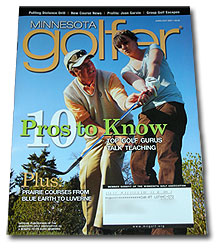 The cover story in the June/July 2007 issue of Minnesota Golfer magazine is titled 10 Pros to Know.

The list is based on the last 10 Teachers of the Year, as selected by the Minnesota Section of the PGA. The article states they will be covering LPGA teachers in a later issue.

A few notable exceptions to the list include Golf Magazine Top 100 instructor Gerald McCullagh (who belongs to the British PGA, not the Minnesota Section) and Interlachen’s Master Professional Jock Olson, who was the 2002 National PGA Golf Professional of the Year and was inducted into the National PGA Hall of Fame in 2006.