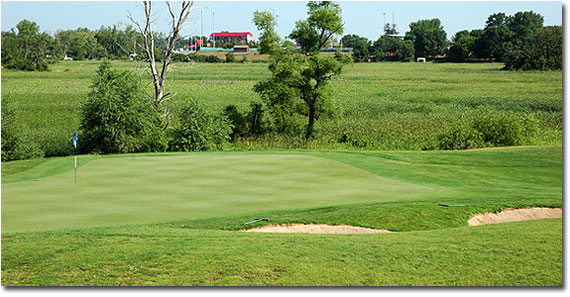 Last week we played Boulder Pointe Golf Club in Elko. The 6,224 yard Kevin Norby design opened in August 2002 and was recently re-rated by the MGA to a 71.2 rating and 131 slope from the tips.

John Elasky took over as head professional recently and has continued to aggressively market the course. They utilize Kevin Unterreiner’s Golf Connect and Twincitiesgolf.com marketing services, which include website design and email mailing lists.

The course is easy to get to from the south metro–just take I-35 south to the Elko exit, drive west on 260th, turn left on Natchez, then left on Glenborough to the clubhouse on your right. The famous Elko Speedway is within view of the first few holes on the back nine.

While the course is relatively short, it is very much a target golf challenge, requiring precise irons shots off many tees to landing areas that are pinched by water and wetlands. The scorecard and tee boxes could provide more help in these situations, especially when the 150-yard poles were missing on several holes the day we played.

The course was in good condition, with just some of the browning of the rough common throughout the area this year due to the lack of rain. We were surprised to the see the course so uncrowded on a Sunday morning, but I think it’s a layout that you either like or don’t. Given the relative lack of course options in the south metro, though, I’m glad it’s around.