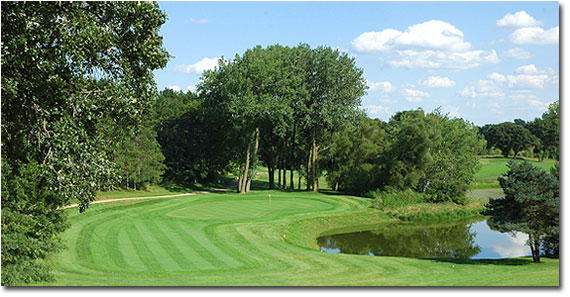 Last weekend we used another silent auction certificate to play 18 holes at Indian Hills Golf Club in Stillwater. This Don Herfort course opened in 1970 and lies hidden just off of Highway 36.

A former co-host of the Tapemark Charity Pro-Am (along with Southview CC), I was anxious to finally see and play this course. Or entire group came away with a very favorable impression–lots of strong, memorable holes, good conditioning and a friendly staff.

The greens were a little slower than the typical Twin Cities private course, but that may have been due to the recent rains more than anything. Several holes were cart path only because of overall sogginess in the fairways.

We played the white tees, which stretched to more than 6,400 yards. A big chunk of that yardage comes at the end of the round in the form of three straight 400+ yard par four holes.

The clubhouse has a bit of a ’70s vibe to it, which was made all the more memorable when the neighbors on the 18th green played Doors songs out the window as we finished in the beautiful Saturday afternoon sunshine.