Al Capone Does My Shirts

While listening to MPR the other day, the commentators were discussing books for kids that are advanced readers. This book, Al Capone Does My Shirts, was one of the recommendations. I picked it up at Barnes and Noble for my oldest, although I really wanted to read it myself.

A fictional account of life on Alcatraz in the 1930s, the story revolves around Moose Flanagan, the son of a guard. Lots of great historically accurate descriptions of what life was like for the families of the workers who actually lived on the rock.

LOVED the ending too…

Yesterday we took in our La-Z-Boy recliner to a charity in Bloomington called Bridging Inc. They give furniture and other household items to people who are going through transitions in their lives.

There is still a day and a half to make a donation to your favorite charity and get a tax break for 2007. Here are some other non-profits and charities I recommend:

British Ad Awards and Frida Kahlo at the Walker

Yesterday my wife and I went to see the 1pm screening of the 2007 British Television Advertising Awards at the Walker Art Center in Minneapolis. We’ve seen these a number of times the past few years, but this was only the second time we’ve seen them in the new(er) McGuire Theater, which has a really great interior design.

Before we went in the theater, we checked out the Frida Kahlo exhibit next door, as there was absolutely no line. The exhibit was great and I learned a lot I didn’t know about the artist. We saw all three of the actual paintings shown above, two of which had pretty twisted stories behind them. Ms. Kahlo was one interesting personality, that’s for sure…

Despite the sad news later in the week, Christmas was a joyous time in the Kingsbury household. The girls got the house all decked out and couldn’t wait for Christmas Eve. I heard that Santa appreciated the cookies and milk and the reindeer ate up all of the reindeer food they left outside (in the tons of snow we’ve received this week).

The picture above shows some of the items I received, including the awesome “Hippies” sign that my youngest gave me. I’ve spent about 20 hours playing the Super Mario Galaxy Wii game, although I found it strange that it allowed me to jump to the end battle without finishing all of the galaxies first. It’s very cool, but it’s a good thing I saved before finishing. 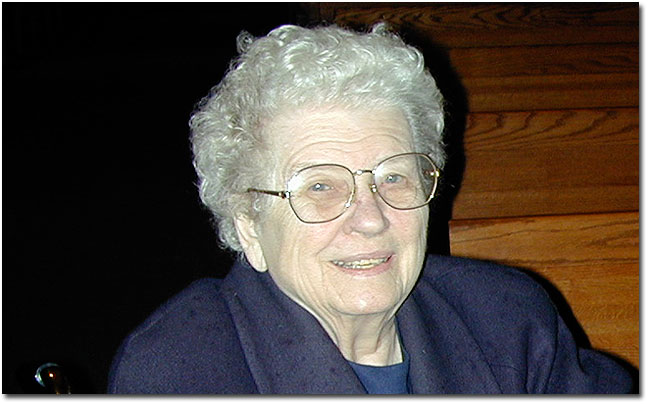 My maternal grandmother, Helen Smith, passed away today after a long fight with Alzheimer’s disease.

She really hasn’t been with us for a few years, so my first feeling is one of relief. My 88-year-old grandfather had been taking care of her by himself, which I know was very difficult for him. She was recently diagnosed with cancer and had stopped eating a few days ago.

Two of my most vivid memories of my grandmother:

I will update this post with her obituary after it’s published. 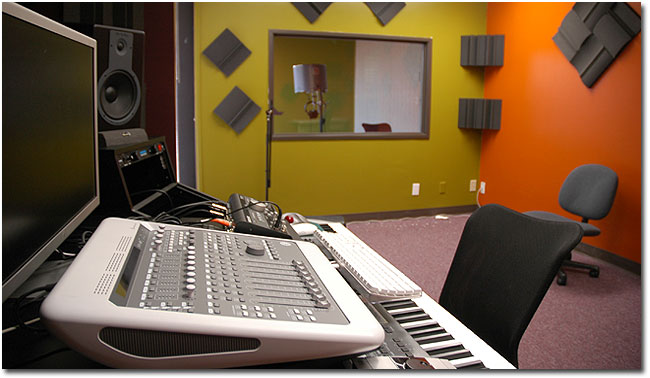 The last tech support trip to HSRA Los Angeles was very productive. My primary goals were to install new security cameras, troubleshoot a student data syncing problem, get their ID card machine working, re-image some old machines, install some new software and do the usual software updates across all 150 machines.

My co-worker who came along did a lot of great work getting machines moved around and cleaning up the ID card machine. I got most of the things done that I wanted, but there are some parts that need ordering to get the rest of the cameras installed. Overall, I’m very happy with the progress.

We got to do a few fun things this time (for a change). In addition to the Vegas jaunt, we went to see the Wild beat the Kings at Staples Center on Saturday night. Very interesting to see how they do things at another arena–especially one with a lousy team and a lot of empty seats. Makes the Minnesota experience seem magical by comparison. Vote for Lubo!

Restaurants included the awesome Kincaid’s Bayhouse at the Redondo Beach pier, the Rocky Cola Cafe (also in Redondo Beach), Good Stuff on the Strand in Hermosa Beach and (of course) a visit to In-N-Out Burger.

It rained the last two days and temps were cool for LA. How I long for that weather now, though…

My co-worker and I took a short little jog up I-15 to spend about ten hours in Las Vegas. We left on Sunday night and got to the Strip about 9:30. We checked in to Treasure Island and I took him on the walking tour of the middle of the Strip: TI, Mirage, Caesar’s Palace, Bellagio and the Venetian.

It was a very cold desert night (the Prius said it was 38 degrees) and I thought the fountains at Bellagio were going to freeze up. We got to watch them with Elvis singing Viva Las Vegas, which was cool.

I don’t think I’ve been to Vegas in almost two years. Changes this time included the new Cirque theater for LOVE at the Mirage (which looked just awesome), construction of the new CityCenter and a new hotel casino between the Venetian and the Wynn called the Palazzo (which looked just like all the other recent towers in town).

I didn’t do much gambling this time, although I played a few hands of video poker and a couple of slots (Red, White and Blue and a piggy one for my daughter). Lost about nine bucks overall. Got a lot of good Christmas shopping done though.

We had the breakfast buffet at TI before heading back on the freeway. Very scenic desert drive in the daytime, but I still prefer flying.

Never thought I’d get a Prius as a rental car in LA, but it was one of the best rentals I’ve ever had.

The very geeky display screen gives you all sorts of info, but I’m still not entirely sure how the car decides to balance the gas motor with the electric one. It drove very much like our old Civic and averaged around 45mpg.

The only things I didn’t like were the annoying beeping when in reverse and the stupid refusal of the display to show the currently playing song on the radio unless you were stopped. 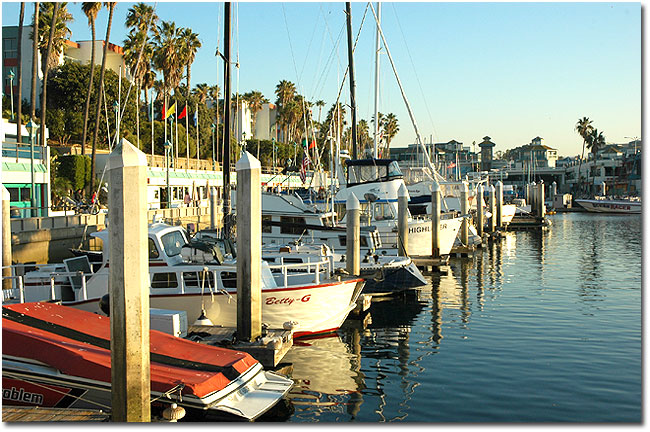 After celebrating our 16th wedding anniversary with my wife on Friday at Trattoria da Vinci in downtown St. Paul, I headed out on my favorite local airline to LAX.

UPDATE: Pictures are now available in the Los Angeles album of the photo gallery.

The Tree is in the House 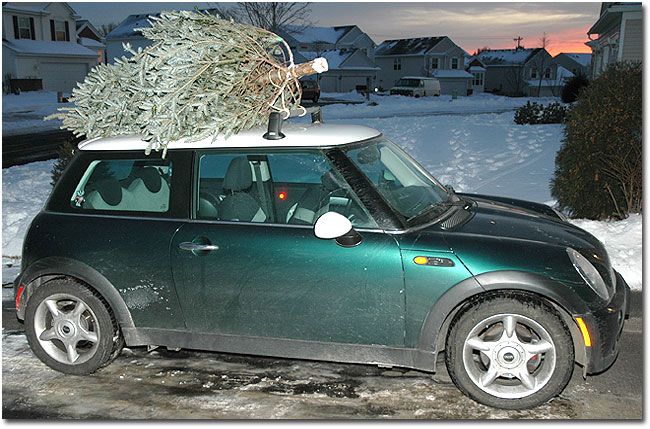 I’ve been sick as a dog lately, but I promised the girls I’d get them a Christmas tree this week.

My parents have the Grand Marais newspaper sent to their home in St. Paul every week and pass it along to me after they read it. The Cook County News-Herald is a great small town paper and often has stories that make me smile. This week, though, they had a story that truly made me laugh out loud.

The November 30th issue had a story about the county website being upgraded to list property tax records online. There was some opposition to this, as the original proposal including the ability to search by property owner name. This was removed after reviewing other county policies in the state, but the final vote included two no votes:

“Commissioners Johnson and Fritz Sobanja voted against the proposal. Johnson said he couldn’t back the plan because of significant opposition he’s heard; Sobanja said he voted no as part of his ‘war against computers.'”

Where do I enlist?

Finished yet another book this week – The Grizzly Maze: Timothy Treadwell’s Fatal Obsession with Alaskan Bears, by Nick Jans.

I first became aware of the Timothy Treadwell story via Richard Thompson’s soundtrack to the Werner Herzog film Grizzly Man. I thought the movie was interesting and was anxious to read another take on this strange guy from California.

The movie contains a lot of the footage shot by Treadwell himself, which is rather eerie. The book goes into more detail on the attack of Treadwell and Huguenard, including the gruesome audio tape that is talked about in the movie (but never heard). I also found the sections about bear behavior and how to survive attacks very interesting.

I love Alaska and want to go back some day, but count me out from getting anywhere near those huge creatures.