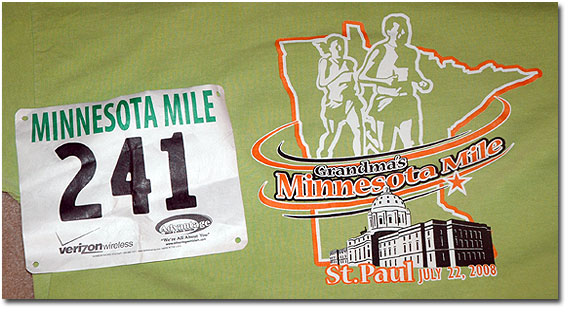 Tonight I ran my first ever Grandma’s Minnesota Mile event at the Minnesota State Fairgrounds in Falcon Heights. There were four different races:

The races were chip-timed, although there was no mat at the starting line. Official times are now available here. Richard Kandie won the men’s mile in 4:09, while Katie McGregor won the women’s race in 4:49. Wow, that’s impressive…

The course was fun, looping around the food and horticulture buildings twice. Not sure why it needed to be a loop course when there is so much space available there, but it wasn’t bad. I was wishing some of the food vendors were there, though.

Mile races seem to be back in vogue, especially as a way for the two big marathons in Minnesota to raise more money by giving away entries to their always-in-demand shorter races (250 random finishers of this race will be offered the chance to enter the 2009 Garry Bjorklund Half Marathon).

Personally, this was an interesting race for me. I haven’t run a timed mile race since high school, so I had no idea what to expect. I’ve done a lot of distance runs this spring and summer, but no speed work at all. My only benchmark was an 800m PR time of 2:12 back in 1987.

Unfortunately, twenty years changes a lot in the speed department, it seems. I ran the split in 2:40, but totally ran out of gas at the end. No kick whatsoever and a weak finish in 6:34. The bar has been set, though, and I’ll definitely be adding some speed work to my marathon training.

The Duluth version of the Minnesota Mile will be held Sunday, September 7, 2008 at 9am.