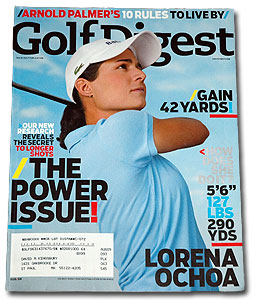 The August 2008 issue of Golf Digest featured a story by Matt Ginella called “Minnesota’s Fab Four: In the Land of 10,000 Lakes, water is always in play.”

Ginella notes that Minnesota has four courses in their top 60 greatest public courses ranking, while California has just three.

His story covers a trip he made to review those four courses: The Quarry and The Legend at Giants Ridge, The Classic at Madden’s and Deacon’s Lodge in Breezy Point.