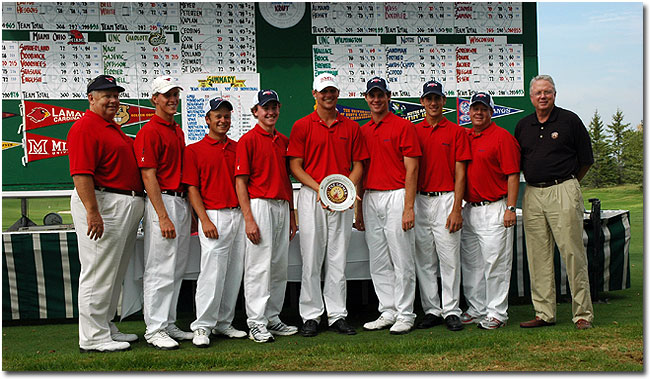 Kelly Kraft of Southern Methodist University set a new course record at Spring Hill Golf Club Monday, as he lead the Mustangs to a dominating team victory in the 2009 Gopher Invitational.

Kraft opened his round with a tap-in birdie on the first hole, followed by two pars, then a disastrous double bogey on the 192-yard, par three fourth hole. His tee shot found the left bunker and he bladed the sand shot over the green and down the hill into thick rough near a tree. The chip back towards the flag hit the surface of the green and rolled back into the original bunker. He was able to get up and down for a double bogey, but proceeded to go eagle-eagle-birdie on the next three holes.

The first eagle was on the 570-yard, par five fifth hole, where Kraft hit a blind pitch shot from the fairway that landed on the elevated green, hit the stick and dropped in the hole. The tees on the par four sixth hole were moved up to 288 yards and Kraft’s tee shot landed on the hill beyond the green and rolled back to the middle of the green. He sank the long, twisting putt for an eagle two.

So to summarize, one double bogey, one bogey, seven birdies and two eagles gives you a course record 64. This broke the previous course record of 65, set a day earlier by Gopher Ben Pisani. Crazy good golf.