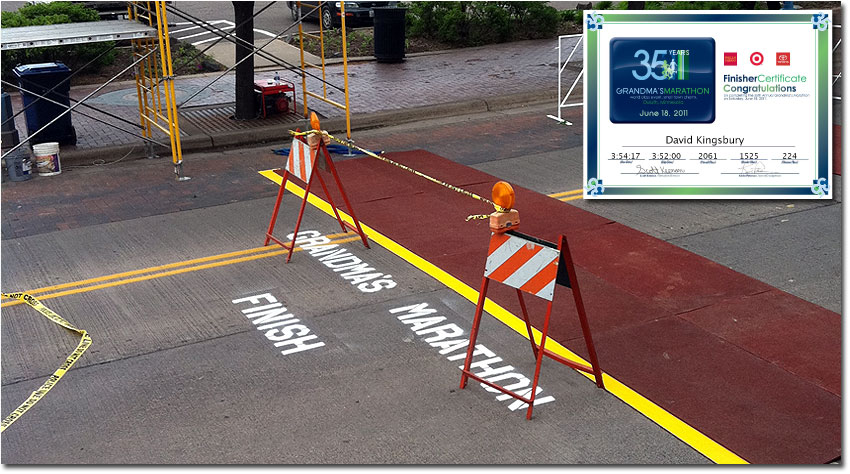 The forecast didn’t look that great, but the 35th running of Grandma’s Marathon turned out to be almost ideal. I took the train to the start for the first time and it rained the entire trip. As soon as people starting exiting the cars, though, it stopped. There were a few drops during the first hour, but mainly it was a nice, cool, overcast morning with a northeast tailwind coming off the lake.

This race continues to be one of the best-run events in the country. It’s the talk of the town everywhere you go all weekend and the local media really cover it well (both print and TV). I spent a lot more time in Duluth this trip than usual and really got to soak in the atmosphere. The expo seemed a little smaller this time, but the 35th anniversary gear was nice and I picked up my traditional race poster with the bib packet on Thursday night.

We spent some time visiting with my sister (and stayed at her apartment), including a first-time visit to the Duluth Grill. Speaking of food, we also hit Gordy’s Hi-Hat in Cloquet and the pasta dinner at the DECC on Friday night (followed by a late screening of The Hangover 2). We also stopped in at the wonderful Duluth Pack store, where work was kind enough to pay for a new laptop backpack.

This was marathon number 18 for me (and seventh Grandma’s). As I wrote on Twitter, I had three goal levels: good – new Grandma’s PR (4:21), better – under four hours and best – overall marathon PR (3:47). I’d been running a fair amount this spring and was relatively healthy (unlike last year’s broken toe). Still, I didn’t really know what to expect for this one. As usual, my body would tell me what it would do once the race started.

I lined up behind the 3:50 pacer, but went in front of him almost right away. I felt decent and ended up with the 3:40 pacer for the first half of the race. I passed them briefly, but that didn’t last very long. They slowly pulled away and I ended up getting passed by the 3:50 guy with a few miles to go. Thankfully I never saw the 4:00 balloons…

My half split was 1:48:28 and I had to take a bathroom break at mile 20. I usually don’t have this problem, but the train didn’t give me enough time to wait in line at the start. I was feeling it in my knees and ankles the last six miles and my splits reflected that:

With the great weather conditions, it’s a little disappointing I didn’t get an overall PR, but I’m still happy with the 3:52. Take off 1:30 for the bathroom break and it would have been a little closer. Twin Cities in October should be interesting…

P.S. – Congrats to my friend Jake, running his first marathon in 4:15:37 and to my high school classmate Cindy, who finished her third marathon in 5:00:02.