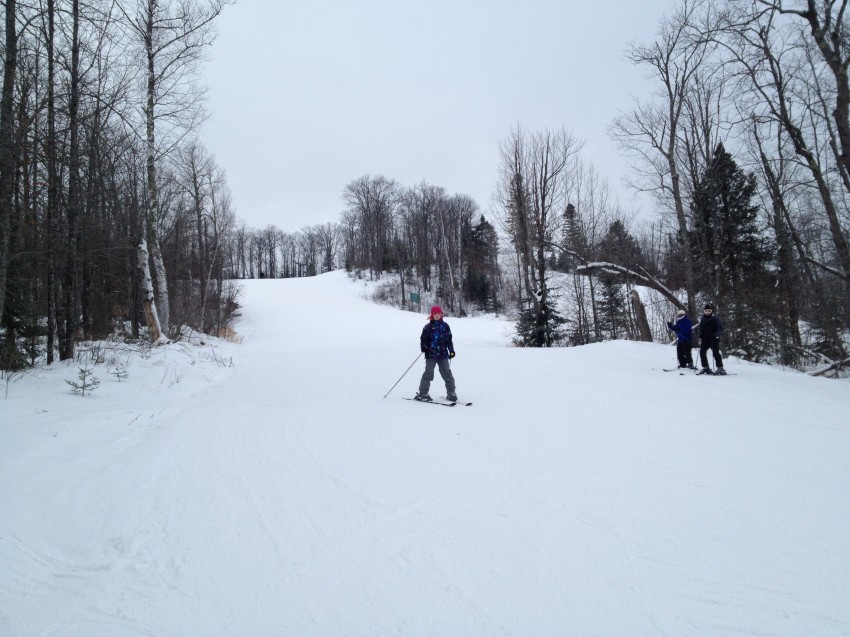 This week we stopped at one of the few spots in Minnesota that has snow right now – Giants Ridge in Biwabik. Of course most of that snow was artificially made, but you really couldn’t tell. The quality was great – not icy and very few bare patches. It helped that there was a dusting of real snow overnight, but overall I was very happy with my first day out this season.

After the big crash last year at Lutsen, I now judge the success of a ski trip by whether or not my face gets smashed on something. The new helmut makes me a little more confident, but I’m still not as agressive as I used to be. I’m slowly coming around to the fact that I should probably dump the ancient straight skis and get something more modern (and safe), but cost is a huge factor right now.

Speaking of cost, I experienced a bit of sticker shock at the front desk. I was hoping Giants Ridge would have a reasonable beginners package available, as one of the kids had never skied and another needed a refresher after not skiing for a few years. All I wanted was a bunny hill lift ticket, rentals and a short group lesson for a reasonable price (say $50?), but they didn’t offer anything like that. I bought four lift tickets, three rental sets and taught my own group lesson and it was $250. Add in several visits to the cafeteria and it was a very expensive five hours.

But I still love the actual sport of skiing – there is really nothing else like it. Freedom to move at your own pace, a connection to the outdoors, the feeling of “beating” winter, spending time with my kids and an adrenaline rush you don’t get from running or golf.

You will never confuse Giants Ridge with Colorado, but compared to other ski areas in Minnesota, it’s fun. I still prefer Lutsen, but Giants Ridge is only a half hour from work. Both of them could use some high-speed, detachable chairlifts, though – the old style chairs take soooo long…