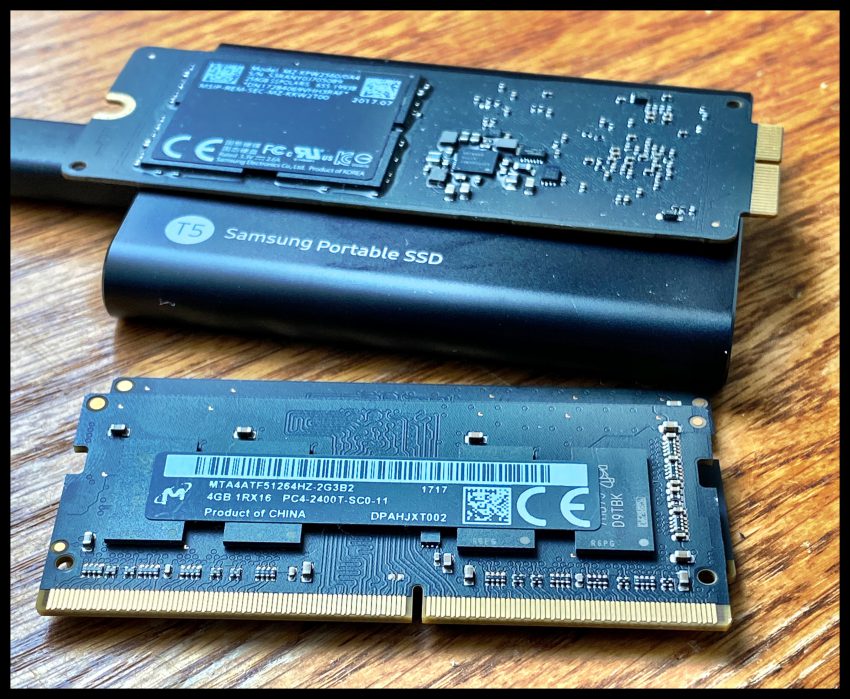 After several months of frustration with managing my (admittedly) large collection of music and photos on our three-year-old iMac, I decided it was time to either look at a new machine or try to rebuild and optimize the current one. Since the new options I liked were all in the $3,000 or more category, I decided to research cheaper options with Mr. Jackpot, our 2017 21.5-inch Retina 4K model (iMac 18.2).

The 3GHz quad-core i5 processor should still be OK for a few more years and I really like the quality of the screen. I’ve been running just the standard 8GB of RAM, though, which seems meager now. For storage, I originally picked the 256GB SSD option internally, with two external 2TB drives connected via standard USB ports. My gut feeling was that this was now a major performance bottleneck, since the operating system was the only thing on the fast SSD and the photo library and music files were on the slower spinning disc drives with no Thunderbolt interfaces.

I’ve been a customer and fan of Other World Computing in Illinois for most of my IT career. I looked at the upgrade options for this model on their site and reviewed the excellent installation videos several times before deciding to place an order. My goal was to upgrade the RAM from 8GB to 32GB, replace the small internal SSD with their 2TB OWC Aura Pro X2 product, then find a suitable Thunderbolt 3 external SSD option. After consulting with my friend Terry, I opted for a non-OWC option, ordering the 2TB Samsung T5 Portable SSD from Amazon (which, of course, was just made obsolete a few days ago with a T7 version).

OWC rated these installs “skill level: advanced” and I was a little nervous. They provided all of the needed tools and parts, but it was still a challenging installation. Last Sunday was rainy anyways, so the timing for this project was spot on. It ended up taking most of the afternoon, with only one initial issue. The Torx screwdrivers OWC provides don’t have very big handles, so I needed to improvise the T8 by attaching a wrench for more torque to loosen the screws on the power unit (which also had some tricky cable connections). Once everything was apart, popping in the RAM and the SSD chips was easy. I reversed the process to close it back up, then started a clean install of macOS Mojave.

Finding license codes for my purchased software took a bit of time. Some companies do a great job of helping with this (thanks, Panic), while others sent me emails after purchase that I archive. It’s interesting how many apps are now subscription services – you just need to remember your credentials to log in, download and activate those products (which now include all of the Office 365 apps, Photoshop Creative Cloud and services like Backblaze). The App Store for Mac remembers your purchases made via that sales channel, so those were easy. Had to use my Cisco login to get access to the AnyConnect VPN client, but otherwise I was able to get everything back in an hour or so. I did end up upgrading 1Password to the latest version, which is also now subscription based.

One area that I need to spend more time on is iCloud. So many things are now tied my AppleID, but it seems like the process is cleaner on iOS than it is on the Mac. I’ve used iCloud for contacts and calendars since it was introduced, but only recently upgraded to the 2TB storage tier for iPhone backups and iCloud Drive usage. I apparently also used my Google Apps account for synching some contacts and calendars, so I need to get that sorted out (and all moved under iCloud). Throw in Facebook and Office 365 integration and my Contacts app is a disaster right now. I do really like how iCloud Drive works, so I will likely move most of my non-media files to that. Also a big fan of using iCloud with the Notes app – super easy to share across devices and basically replaces Stickies for me.

As I progressed with the customization of the new SSDs, I wasn’t very happy with performance. I couldn’t figure out what the issue was, so I turned on the screen saver and went for a walk. When I got back, the machine locked up on me and I had to do a hard power reset to get it to reboot. I noticed the middle of the screen was really hot, so I went back to the install videos and realized I might’ve missed plugging the fan back in. I downloaded the free version of Macs Fan Control and sure enough, the fan was not spinning (and all the temp indicators were high). Guessing the heat was throttling the CPU performance, so it was back to the screen removal tool to pop back inside and reconnect the cable. Thankfully, I was able to reach it without having to take everything apart again. It’s been blazing fast (and cool) ever since and now I’m a very happy camper.

There is still a lot of work ahead of me, but everything is humming along. I’ve started to rebuild the music library using Music, with the files stored on the external Samsung. So far I’ve just downloaded past purchases and ripped a couple of new CDs, but my old library will get added next. I turned off all of the Apple Music and online syncing stuff and performance seems to be fine. I’m hoping Photos running on the internal SSD will also work better, but I haven’t started that yet. Also hoping I don’t need to reset my iPhone to factory default to get photo sync to work correctly in the Finder, but I’ll cross that bridge when I get to it.