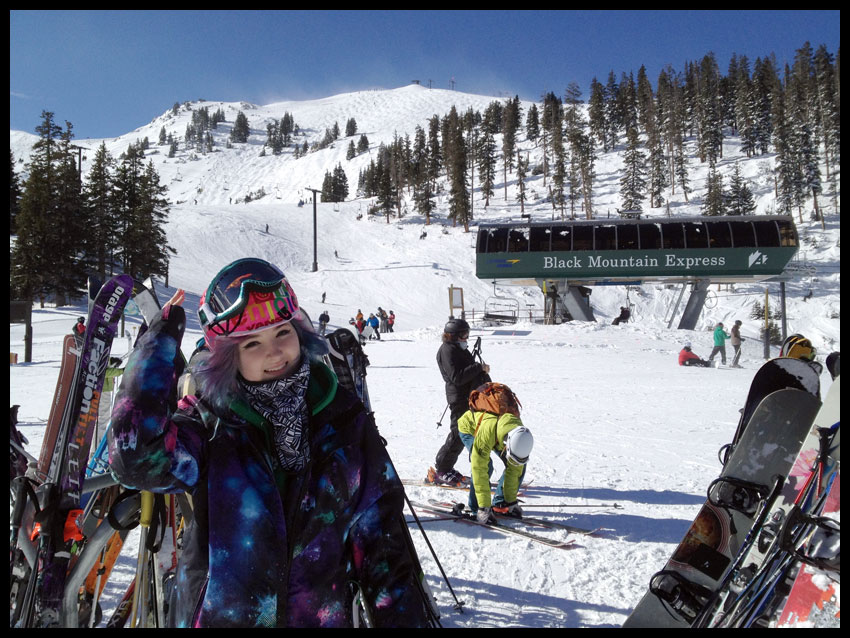 When my daughter’s favorite group, Atmosphere, announced they were performing in the first ever winter show at my favorite venue, Red Rocks, we had to figure out a way to make that happen. After some mad Google Mapping and creative budgeting, the road trip was on.

We packed up the MINI and hit the road last Thursday afternoon. After a quick stop at the Axel’s Bonfire in Eagan to eat some free birthday Bull Bites, we drove to Lincoln, Nebraska (420 miles). Holiday Inn Express was our hotel of choice this trip, thanks to their decent breakfast food and relatively low prices.

On Friday, we drove from Lincoln to Littleton, Colorado (500 miles) and checked in earlier than planned at the hotel. I totally forgot about the time change, so we had an extra hour before the concert started. We hit the local King Soopers grocery store to check on discounted lift tickets (not a great deal – skipped it) and had dinner at a surprise Chick-Fil-A (totally forgot they are in Colorado). I don’t care what anybody says – that food is damn tasty!

The concert was scheduled to start at 7:30, but I wanted to hike around Red Rocks before the sun went down. We had about 45 minutes of daylight, which turned out to be just about perfect. Since we were so early, we also got an awesome parking spot in the VIP area immediately below the main exit. We hung out in the car until gates opened at 6:30 and made a beeline to the merch table, which unfortunately was at the very top of the amphitheater. Many stairs later, the kid got what she wanted and we hiked back down to row ten to watch the show (it was general admission, so we took what we could get).

The bill consisted of Get Cryphy, Grieves and Budo, Common and headliner Atmosphere. Get Cryphy was playing as soon as the gates opened, which was nice. The set by Grieves and Budo was brief, but entertaining. Technical difficulties delayed the start of the Common set by about 30 minutes – I felt bad for his band (two keyboardists, a drummer and an MC), who just sat there in the cold the whole time.

I’ve listened to most of the Atmosphere albums, but there are still a lot of songs I just don’t know. This was not a problem for the kid, though, who sang along to everything. I do know that God Loves Ugly was the opening song and Brother Ali finally came out for the very last song (which wasn’t really an encore, as all the performers went off stage for only a minute or two at the end). The crowd was a little rowdy, but the close quarters and movement helped keep it warmer. A few snowflakes added character, along with lots of “special” smoke in the air, too…

The show ended around 11:45 and we were able to beat the worst of the traffic, thanks to our great parking spot. We made it back to the hotel around 12:30 and were back on the road by 8:30. I decided to skip Beaver Creek this time, opting to take the Loveland Pass over to Arapahoe Basin. I-70 looked good on the traffic cams at 7AM, but all three lanes were bumper-to-bumper about five miles up the grade. We finally made it to the Loveland Pass exit and I white-knuckled it up and over the treacherous two-lane road with no guard rails. Even driving my own car with snow tires, I wasn’t comfortable at all and will probably skip that option in the future.

A-Basin was just perfect. I had been there once before in high school and not much had changed. I take that back – they had a great new high-speed detachable lift right in front of the base chalet and a nice mid-mountain restaurant called the Black Mountain Lodge, where we had lunch. Rentals were quick and easy for the kid and I loved the pricing, which was cheaper than what we paid in Minnesota. Since they consider teens to be kids and not adults, her lift ticket and rental was only $59. Add in my $74 adult ticket and you had quite the Colorado bargain.

We took most of our runs off of that high-speed quad, with the “green” run Sundance being her favorite. Parts of that run are steeper than most “blacks” in Minnesota, so I didn’t mind skiing it like a mid-length cruiser. I was also quite fond of High Noon and took a few runs from the top of the mountain too. I would’ve done more up there, but the wind really picked up as the day went on. We managed around ten runs total before stopping around 3PM.

The rest of the trip was basically a big highway blur: Arapahoe to North Platte, Nebraska (320 miles), overnight one last time at the Holiday Inn Express, followed by 640 miles back to Minnesota on Sunday. We stopped for a steak lunch in Omaha at the lovely Upstream Brewing Company in the Old Market part of town and had some boring Wendy’s in Clear Lake, Iowa, for dinner.

Great trip, but oh so short. First vacation in three years, though, so I’ll take whatever I can get.

Now to figure out how to finally become a ski bum… 🙂