The Art of Email 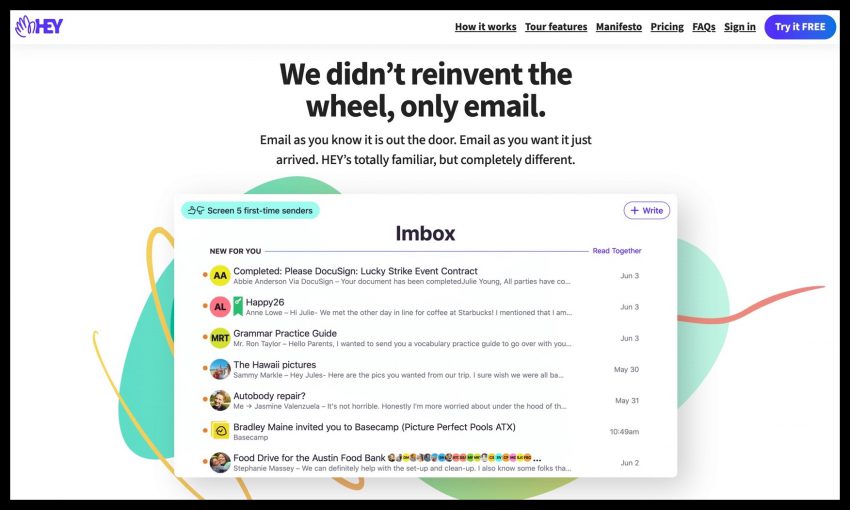 When I first heard that the company behind Basecamp was going to release a new email product, I was skeptical. Many others have tried to improve on the pitfalls of email, but nothing has really stood out. I’ve gone through several phases of email management, both personally and professionally. Running your own email server is not for the faint of heart, but I very briefly tried to do that with a mix of Exim, Postfix and a few other tools that tried to deal with the huge amount of junk mail on the internet.

For my personal email, I got in early enough with Google that I get to use their current G Suite service for free. On the work side, one of the first decisions I made in my current job was to move to Office 365 (now Microsoft 365) instead of having an on-site Exchange server. So right now I use the Apple Mail clients for my 7minutemiles.com account and the Mac Outlook clients for work (I like to keep them separate and use both iOS and macOS apps). Spam prevention could be better (especially on the Microsoft side), but I’m mostly OK with my current setup and routine.

I’ve been a fan of Basecamp CTO (and Ruby on Rails creator) David Heinemeier Hansson for quite a while. I agree with a lot of his business philosophies (“It Doesn’t Have To Be Crazy At Work”) and he is usually a good follow on Twitter (just avoid the weeks when he is feuding with Apple). When DHH announced that they were doing a new email thing called Hey, I sent in a request to be one of the early adopters. When my invite code came last week, I grabbed kingsbury@hey.com and started to kick the tires.

Things were kinda hard to test out until I auto-forwarded my 7minutemiles.com traffic to this new account (custom domains are not yet supported). The video I watched from Basecamp CEO Jason Fried got me pretty excited about the features, so I was starting to think this might be worth $99 a year. They give you a free 14 day trial to test things out and here I sit with seven days left, an “Imbox” full of sample messages and a growing sense that this is not really for me. So, what are my main issues with Hey?

This would really only be worth $99 to me if I could move over my domain name, which they say is coming soon. Do I roll the dice and subscribe next week (both in anticipation of that feature and to keep the vanity address)? Most signs point to no – Google doesn’t charge me anything now and I’m mostly happy with how I manage email overall. I will keep messing with Hey until the trial expires, though. Who knows, maybe things will click in another day or two?