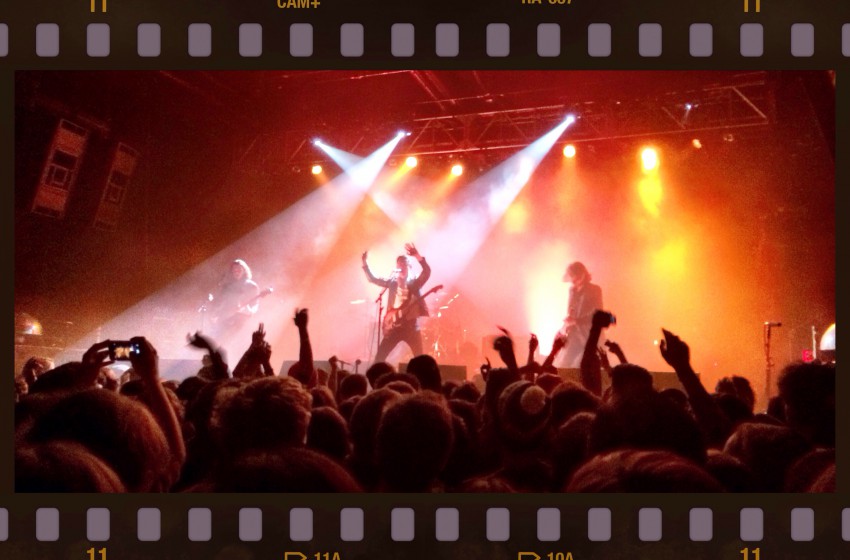 As soon as the arena-quality lighting effects started during their introduction, you knew this was going to be a true rock and roll show. The opening notes of Do I Wanna Know? were just chilling – the Arctic Monkeys were ready to bring it to First Avenue for Valentine’s Day in a big way.

This was my first time seeing Alex Turner and the gang from Sheffield in person and they did not disappoint. It’s just amazing to me that they play Madison Square Garden one week, then before 1600 people at a very sold out First Avenue the next. Stuff like that just doesn’t usually happen (although First Ave does get a fair share of these shows – see Black Crowes, Paul Simon, etc.).

Surprised there was no Chris Riemenschneider at this show – I’ll have to see if I can find a full set list somewhere. I do know the three song encore consisted of an acoustic Cornerstone, then One for the Road and R U Mine?, while the main set ended with 505. Of course Why’d You Only Call Me When You’re High? was somewhere in there too, along with Snap Out of It, Fireside and Fluorescent Adolescent.

The band was tight and sounded great in that room. Bassist Nick O’Malley and lead guitar Jamie Cook don’t play with a lot of emotion, but were technically very good (as is drummer Matt Helders). Turner has the rock star act down pat, raising and holding his hands in the air for maximum effect, combing his hair between songs and grinding his hips to make the ladies swoon. And that voice – wow.

The Monkeys have five albums out, all of which went to number one in the UK. They’ve also won five Brit Awards (including Best British Group twice), so it was really a special treat to see them in such an intimate venue. Well, maybe a little too intimate. The kids wanted to be up front and we were essentially right in the middle of the floor. It was jammed in there and once they took the stage, there was a huge surge of people pushing up on my back. I basically spent that first song leaning backwards at a 45-degree angle so I wouldn’t get pushed over. No complaints though – that’s part of the deal with standing there instead of my usual spot by the soundboard…

Speaking of kids, this was an 18+ show and the FAQ on the First Ave website said people under 18 can attend with their parents. We unfortunately didn’t have them bring their school IDs, so the very nice front door manager looked for “family resemblance” and decided the photo I had on my phone of the two of them was enough proof of parenthood. Both kids got the black X (along with Colleen) and we were told they had to stay by us for the whole show (hence the crowded main floor).

Next up: Jeremy Messersmith on February 22nd.