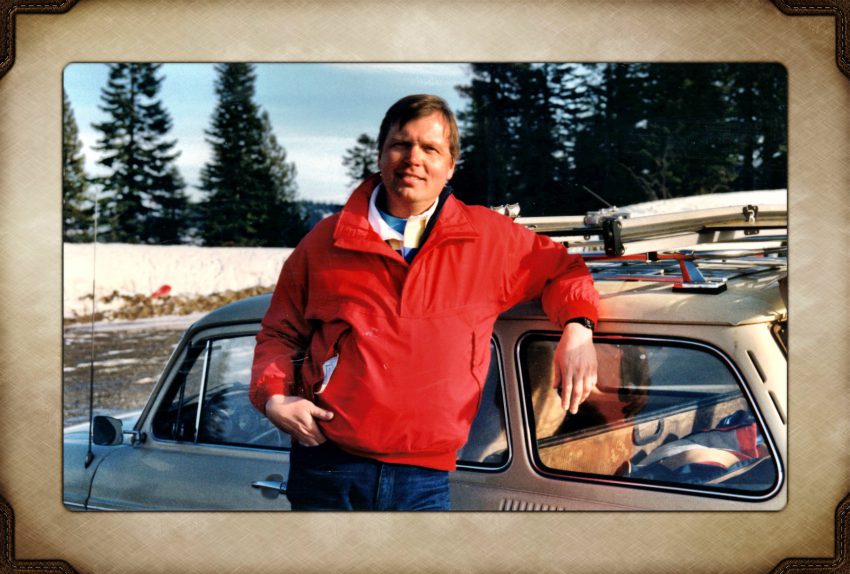 Decembers have not been kind to the Smith side of the family. Eleven years ago, I lost my grandmother Helen Smith on the day after Christmas. In 2013, my grandfather Donald Smith passed away on December 30th. Last year, my mom died on December 22nd. This year, we learned that my mom’s brother Greg passed away early Christmas morning in Spokane, Washington.

Uncle Greg was kind, generous, funny and progressive. He grew up in Minnesota and went to law school here before heading west. He briefly led my dream life as a ski bum, running chair lifts at Schweitzer and living in the slope-side Tamarack condo that I would visit every spring break from age nine through college. Later, I would bring both daughters to visit several times (one time via Amtrak’s Empire Builder and one time in the Mini Cooper). He was hired by the city of Spokane as an attorney and eventually became a hearing examiner before retiring. I vaguely remember his old house in the valley and vividly remember the blue house up the hill from downtown on 8th. He had a fondness for old station wagons (VW and Volvo) and I’m not sure if he ever bought a new car from a dealer.

Greg was very active and definitely helped shape my love of skiing and running. The spring break trips were great, as my mom worked for the airlines and I could fly to Spokane for free (I also loved that the Spokane airport code was GEG). Schweitzer didn’t always have the best snow cover in the spring, but there was always plenty of sunshine and I usually returned to school red as a lobster. As I recently posted, frequent stops at The Station House restaurant were a given and I’m pretty sure I wore out the Lee Oskar cassette tape Before the Rain.

Greg’s birthday was two days after Christmas (he would’ve been 72 tomorrow), which was just close enough to usually get the shaft as far as dual celebrations go. He was always so generous with my brother and sister, though, opening Spokane bank accounts that he always deposited money in every Christmas and birthday. When each of us turned 18, he would present a large check that we could use for college, new skis or whatever we wanted. Later, he did the same thing for my girls (he was also MK’s godfather).

I didn’t make it out to Spokane much outside of winter, but do remember running the Bloomsday 12K race with him in 1996 (he ran almost every year with a big group of friends). Speaking of friends, Greg had a million of them. It was impossible to walk around the lodge at Schweitzer without a ton of people stopping to say hi. Greg never married, but had several girlfriends I met over the years and his long friendship with the Barbieri family was special. I also seem to remember playing golf at Indian Canyon one year and having dinner downtown at Clinkerdagger, Bickerstaff and Petts (which apparently goes by just Clinkerdagger these days).

Thanks, Greg – you will be dearly missed…❤️

Passed away early on Christmas Day, 2018 after a stroke. He was preceded in death by his parents, Donald and Helen Smith and older sister Karen Kingsbury. Survived by bother Jeff (Joyce Riestenberg-Smith) and sisters Stacey Kohner (Richard) and Linda Arcand (David) and brother-in-law Michael Kingsbury. Nieces and nephews: David Kingsbury (Colleen), Brian Kingsbury (Patty), Lynn Kingsbury, Thomas Smith (Jean), Peter Smith, Laura (Aaron) Moser; great grandnieces and nephews Sasha, Marisa, Arianna, Galen, Wyatt and Ethan. Greg was born and grew up in St. Paul, went to Central High School (’64) and then to the University of Minnesota. He loved sports and the outdoors and spent 7 summers on the staff at YMCA Camp St. Croix. At the U, Greg was very active in The Kappa Sigma Fraternity, playing IM sports, acting in Campus Carnival shows, and singing in a University Chorus. He went on to the U’s Law School, graduating in 1972. After spending 2 years, working for a judge in Winona, Greg and a group of friends headed west, looking for new professional and recreational challenges. The group found Sandpoint Idaho and Spokane Washington, and after passing the bar in both states, Greg went to work for the city of Spokane. He was an Administrative Law Judge when he retired in 2013. Greg said he never regretted moving west. Spokane seemed a perfect size to him, and he enjoyed the cultural and sporting opportunities available. He loved the Blooms Day runs in the spring and Skiing at Schweitzer in the winter and in between there were rivers, lakes and trails to explore by foot, canoe or bike. Greg was a very social person. When he was younger, he volunteered regularly with Big Brothers. He met people easily and developed a large base of friends for book clubs, traveling or just general good times. He was also very active in supporting social causes. Those supported ranges from Doctors Without Borders to the Humane Society. Greg’s last years were hard. He battled depression and health issues and in the end he couldn’t defeat them. As a memorial to Greg please make a donation to a cause you feel needs support. He’d be proud of you. A private family memorial has been held.